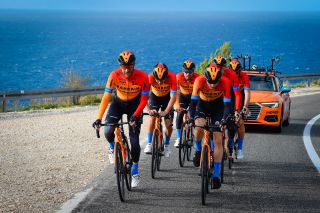 The 2020 WorldTour season is just around the corner and with the first race just over a month away, most of the top tier teams are holding pre-season training camps to distribute new gear, present themselves to their sponsors and the world and to work on team building exercises.

Cyclingnews is the best place to keep abreast of all the team announcements and activities. We'll give you details of each team's plans - who's where, what they're doing and when.

At Cyclingnews we cover these training camps extensively, attending many of them for exclusive news and interviews, and we'll include links to all our coverage here, so keep checking back for all the latest news, features, interviews, tech, video, and photos from our reporters across Europe.

As usual, AG2R La Mondiale held their first pre-season get-together in Vaujany in the French Alps in late November. With no bikes in sight, it was a chance for ice-breaking and team-building, with a number of winter sports on the agenda. After formally presenting the 2020 squad in Paris, the team headed to Gandia in south-east Spain in mid-December for a proper training camp

Cyclingnews was at the Vaujany camp and sat down with a number of key figures at the team.

Astana have been training in Calpe, in south-east Spain, where they held their team presentation on December 14.

The new-look Bahrain McLaren team was unveiled at the headquarters of McLaren in England on December 9, with a new manager, sponsor, and colours, along with plenty of new faces.

The team headed to Hvar in Croatia for a pre-Christmas training camp, where Cyclingnews interviewed a number of key riders.

After their most successful season to date, Bora-Hansgrohe presented the squad for their 11th season in Berlin on December 3, where we spoke exclusively to Peter Sagan.

On December 7, they headed to Mallorca for a two-week training camp.

Just like the old BMC days, the CCC Team gathered in the second week of December in Denia, south-east Spain, for their annual pre-season training camp. In the plush surroundings of the Marriott La Sella golf hotel – arguably the nicest you'll see in training camp season – the team held a media day on December 16.

One of the two new WorldTour teams, Cofidis were in Calpe from December 11-18.

Deceuninck-QuickStep, who topped the WorldTour ranking and victory standings in 2019, train in Calpe, in south-east Spain. After a first training camp in December, the Belgian team will head back in early January, when they'll hold a media day.

EF Education First are in Girona, Catalunya in December. Cyclingnews paid the team a visit as part of our whistlestop tour of eastern Spain.

The French team were one of the numerous teams in Calpe, from December 10-18.

Team Ineos always hold their training camps in Mallorca, although the days of media being allowed near are long gone. The team's main training camp takes from December 10-20.

Geraint Thomas has already completed a 309km lap of the island, while the team had the roads closed for a time trial event in which acquaintances of Ineos owner Jim Ratcliffe paired up with a pro, complete with finish line gantry and live commentator.

Israel made its first entry into the UCI WorldTour after buying out Katusha-Alpecin's licence and launched its team as Israel Start-Up Nation at the presentation in Tel Aviv on December 11, 2019.

Riders enjoyed long training rides through the desert and views into the area's history as they prepared for the challenges that 2020 will bring.

Jumbo-Visma held their training camp in Girona from December 11-19, with Cyclingnews paying a visit at the weekend. On December 20, the team was formally presented in the Netherlands.

Lotto Soudal are one of the teams who headed to Mallorca, holding a 10-day camp there from December 11-21.

Movistar are part of the Calpe mid-December gang and held their team presentation on December 19.

There was no South African camp for the old Dimension Data team this year. Rather, they headed to Japan for a team presentation at the home of new title sponsor NTT, before heading to south-east Spain on December 9 for a two-week camp.

Team Sunweb launched its 2020 team in Amsterdam at the 'House of Mobility' experience centre created by Cervelo's parent company Pons on December 10. The team lost star rider Tom Dumoulin for 2020 to Jumbo-Visma, but look to refocus on new riders like Tiesj Benoot (Lotto Soudal) and established sprinter Michael Matthews.

The team continued its 2020 efforts at a training camp in Calpe, Spain through to December 18.

The Trek-Segafredo men's and women's team gathered near Siracusa, Sicily for their winter training camp between December 10-20, combining blocks of hours in the saddle with massage, bike fitting sessions, base testing planning and preparation for the rapidly approaching 2020 season.

Trek-Segafredo's men's and women's team are run on a shared structure of staff and resources and so there were over 100 riders and staff present at the I Monasteri golf resort a few kilometre inland from the west coast of Sicily.

Cyclingnews was there for a series of exclusive interviews with riders and management.

UAE Team Emirates held their main pre-season camp in Benidorm, near Calpe in the middle week of December. Cyclingnews spoke to a number of riders there on December 17.