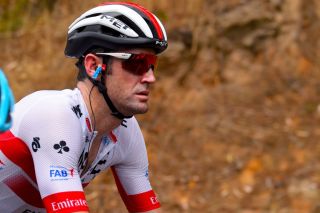 Israel Start-Up Nation rider Rory Sutherland has suffered a fractured leg after crashing an electric scooter while at the team's training camp in Tel Aviv, Israel.

The Australian was returning to the team hotel after a meal in the city on Tuesday evening, and came off the scooter after hitting a kerb on the pavement.

He was taken to Ichilov General Hospital later that night and underwent an operation on the upper section of his femur on Wednesday afternoon.

"He used one of these scooters to come back from the city and unfortunately he went towards the kerb," team manager Kjell Carlström told Cyclingnews. "It wasn't anything the other guys thought was that serious. But well, there you go.

"We don't know the prognosis yet, but he has already been operated on. Hopefully we'll know more after a couple of hours, and we'll see exactly what the situation is."

Sutherland was forced to miss the Israel Start-Up Nation team presentation on Wednesday as a result of his injury and will surely miss several months of the 2020 season.

The Australian joined Israel Start-Up Nation for the 2020 season, one of 17 new signings as the team rebranded as part of its move up to the WorldTour. He made the move from UAE Team Emirates on a one-year contract alongside Dan Martin, who will serve as a team leader.

Now 37, Sutherland has been a professional since 2005, riding for Rabobank, United Healthcare, Tinkoff, Movistar and UAE Team Emirates during a 15-year career.