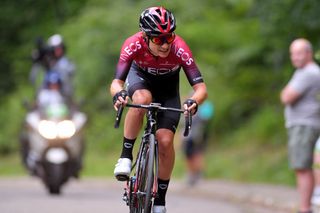 Kenny Elissonde will swap his Team Ineos colours for Trek-Segafredo's red and white in 2020, hoping he can again use of his pure climbing skills to attack in the mountains as he did early in his career when he won on the Angliru at the Vuelta a España.

The 28-year-old Frenchman has spent the last three seasons at Team Sky and Team Ineos in a purely domestique role. He has no regrets and no criticism of the British team but is clearly ready to express himself when not riding in support of Richie Porte and Vincenzo Nibali.

"I'm a climber and so I like to attack in the high mountains; I missed that at Ineos. I had the legs to attack sometimes but due to the race plans, I had to work for others. Being a domestique is a noble role but I also like to attack, it's part of my character," Elissonde told Cyclingnews during the recent Trek-Segafredo camp in Sicily. At camp, he trained with his new teammates and prepared for his 2020 debut at the Tour Down Under where he will ride alongside Porte.

Richie Porte returns to Tour Down Under

Vincenzo Nibali: I couldn't wait to change teams and now I can't wait for the new season

"When I moved to Sky in 2017, I knew where I was going and that my role would be different. I don't have any regrets about riding for Team Sky and Team Ineos because I learnt a lot. People can say what they want about the team but it's a great team to learn things and improve.

Elissonde has forgiven Team Ineos for calling him to Spain for the Vuelta a España only to select David de la Cruz in the final days before the start. He has not raced since the Vuelta a Burgos in mid-August and so is hungry to get race again at the Tour Down Under and then finally make his debut at the 2020 Tour de France.

"As a French rider and never having ridden the Tour, it's a big objective for me. I also live in Nice and the Tour starts there, so it's going to be special," he explained.

"I'd love to ride Vuelta a España too, because I've won a stage there, so it's be good to ride the Tour and the Vuelta but it depends on the what the team wants too."

Most of all, Elissonde wants the freedom to express himself in the high mountains.

"I love the climbs and I think a pure climber is an artist. We're different, we love to suffer on the climbs and spend so much time in the mountains.  We wait and wait for the moment to attack and then if we're good enough, we can do something special. I hope to chase those emotions again in 2020," perhaps already imagining himself on the attack in the Tour de France.

"It's harder for the pure climbers now because in modern cycling the tempo is very high and often very controlled by teams like Ineos but it's important to try to attack. I think it's always worth trying. I live to attack in the mountains.

"It's different for a GC guy because they have a lot to lose and there's a team there to help, and a team he has to ride for. GC guys can't take too many risks and screw up. But as a pure climber, we don't have those chains holding us back."

Elissonde reveals he is a secret admirer of Mikel Landa and the Basque rider's ability to go on the attack, caring little for the consequences. Landa has broken free of the Movistar team tactics by moving to Bahrain McLaren, where he will be team leader at the Tour de France.

We shouldn't be surprised if Elissonde joins Landa on one of his attacks in the high mountains come July.

"I like Mikel Landa because he's never afraid to attack and blow up a race. He's a pure climber who also goes for the GC. I know the fans like #FreeLanda and 'Landismo' because he throws caution to wind and attacks. I hope to find my inner Elissondeismo in 2020 too."