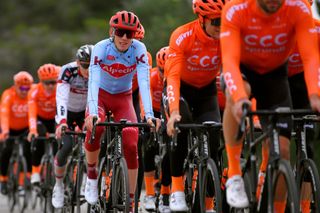 Ilnur Zakarin is determined to compete at the Tokyo Olympic Games in 2020, even if it means doing so under a neutral flag. With Russia recently banned from all major international competitions by the World Anti-Doping Agency [WADA], he has even considered switching his nationality to Cyprus, where he has lived for the past six years.

Last week, WADA announced a four-year period of non compliance for the Russian Anti-Doping Agency [RUSADA], meaning Russia’s flag, name and anthem will be banned from the Olympics in Tokyo next July and August.

As was the case with the 2018 Winter Olympics, some Russians will be able to compete as independent athletes under a neutral flag.

“I would like to compete, under any flag,” Zakarin told the press on Monday during a training camp in Spain with his new team, CCC.

“If Russia is not allowed, and if I can compete under the neutral flag, it’s very important for me.”

Although he’d be unlikely to acquire Cypriot citizenship in time for Toyko, Zakarin said it’s something that has crossed his mind, and could be an option for the future.

Zakarin was prevented from competing in the 2016 Olympics in Rio, shortly after WADA’s McLaren report had first laid bare the scale of state-sponsored Russian doping.

Although the International Olympic Committee did not enforce a blanket ban on the Russian federation for the Rio Games, it did seek to bar those who had previously been implicated in doping. Zakarin, who served a two-year ban between 2009 and 2011 for the anabolic steroid methandienone, was among them.

Zakarin did, however, claim he had in fact been given the green light to compete in Rio, as responsibility was handed to the various sporting federations and athletes were considered on a case-by-case basis.

“At the first stage, everyone implicated in doping in the past was not allowed to compete at all in the Olympics. The decision that I was allowed to compete was taken just two days prior to the start. There was no time, from being allowed legally to compete, to prepare myself and go to Rio, so it was unrealistic. It really hurt."

The second, recent ban on Russia – a result of the conditions of RUSADA’s 2018 reinstatement not being met – differs from the first in that WADA is imposing a sport-wide ban, rather than making recommendations to the IOC and other bodies.

There is no indication at this stage that riders with previous doping sanctions will be prevented from competing under a neutral flag – just those who are directly implicated in the state-sponsored doping programme and McLaren report.

The UCI recently told Cyclingnews it would set up a ‘case-by-case eligibility procedure’, where riders would have to prove their integrity on an individual basis. Zakarin feels he has a strong case and is ready to argue it.

“I’m very fair with doping controls. I’m openly tested during races and out of races at home. I have nothing to hide. I was exposed to more than 100 tests [this year], and everything is clear. That’s why I believe I can compete in Tokyo,” he said.

“The whole situation is related to RUSADA and a Russian body. It’s been more than six years that I’ve lived outside Russia. WADA claims it was the incorrect process of Russia, and so the only incorrect body is RUSADA, but all my tests are done by the UCI and WADA – not by the Russian testing body. It’s why I’m separate. I’m away from the problem.

“I’m ready to provide any documents or paperwork. I didn’t work on it yet because the information is recent but, of course, I’m ready to deliver what is necessary. In sport, you always have to prove something, so I’m ready for it.”

That said, he's far from happy with the situation.

"Many of us are very angry that, because of the political decision, all sportspeople are suffering. I’m really fortunate to be in a sport like cycling which doesn’t only depend on the Olympic Games. I know others from swimming or other sports who are directly connected to the Olympic cycle, planning births and their lives, and they have no such choice and no such opportunity."

He will only make a decision on how to approach the Tour de France – and whether to ride it at all – once the Giro is over.

“The Giro is always a very open race that rewards courageous riders. The Tour is a more conservative race. That’s only my opinion, but it’s why I like the Giro much more,” Zakarin said, outlining his decision.

Zakarin seemingly came of age as a Grand Tour rider in 2017, when he backed up his 5th place at the Giro with a podium at the Vuelta a Espana. However, he has been unable to kick on in the past two seasons. In 2018 he targeted the Tour for the first time and finished 9th, before returning to the Giro this year and placing 10th with a stage win.

Next year, less of an emphasis will be placed on overall placings in Grand Tours. Team manager Jim Ochowicz told Cyclingnews that, while Zakarin will be expected to compete for week-long stage race titles, the priority at Grand Tours will be stage wins.

“I have to be back on the sporting level I was previously,” Zakarin said. “If I’m in good shape at the week-long races, I’ll be pretty sure I can perform well at the Giro. What’s very important, though, is not just to finish sixth or seventh on GC, but to be active and win stages and wear jerseys.”

Zakarin said his first impressions of his new team are overwhelmingly positive. With a new coach, a new training regime, and new equipment, it’s all change, but he’s more motivated than ever.

“The last two years were not successful for me but all the changes are coming at the right moment. There is fire and desire inside me.”