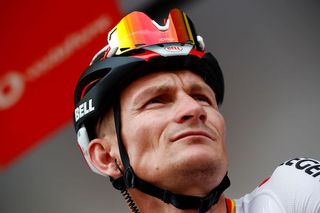 André Greipel has put a difficult year at Arkéa-Samsic behind him, saying that he still has the same passion for the sport after breaking his contract early in order to move to Israel Start-Up Nation for 2020.

The German sprinter moves back to the WorldTour next season after the Arkéa experiment results in a single victory during the 2019 season. Greipel left the team in October, midway through a two-year deal, and says that he's excited for a fresh start.

"Exactly – I'm always excited [to start the year]," he tells Cyclingnews at the Israel Start-Up Nation team presentation. "That's why I'm wearing a jersey. Otherwise, if I didn't want to part of all this then I wouldn't wear a jersey any longer. I'm really happy to be a part of this project."

The project is the new form of Israel Cycling Academy, the Israeli team founded back in 2015, which has ascended to the top tier of the sport for 2020 after taking over what remained of Katusha-Alpecin.

Greipel was among 17 new faces at the squad at the team training camp in Tel-Aviv, Israel, and – echoing sentiments widely shared by his new teammates – he said that he felt comfortable immediately upon joining the team.

"Directly from the first moment, I felt really comfortable here because there are a lot of familiar faces in the team," he says. "So, yes, I'm comfortable.

"I don't need to talk about offers, but it was an easy decision [to join] because straight away I spoke the same language with Kjell [Carlström, team manager]. And the friendships were also a good start; to ride together with Nils [Politt] and Rick [Zabel] in the same team.

"Cycling is already hard, and if you can be on the road with a lot of familiar faces, it helps. It was my main objective, to enjoy racing. That's the most important thing."

The 37-year-old lives in the same town as Politt, near Cologne in Germany. The pair are training partners, and their close relationship should make for an interesting dynamic at the cobbled Classics next season.

Politt, 12 years Greipel's junior, finished fifth and second at the Tour of Flanders and Paris-Roubaix respectively last season. Meanwhile, Greipel has also put in a number of impressive cobbled performances over the years, including a top ten at Roubaix in 2017.

"It's my role a bit to look after him and let him step a bit on the brakes when it's not necessary to put down big power on the road," Greipel laughs.

"He needs to learn a little bit, but on the other hand, the way he's riding also helps during the Classics. For sure, there will be a lot of times when I'm at the side of Nils, supporting him as good as I can through the year. We'll see how it goes."

Greipel's own ambitions are still high, despite his off-year at Arkéa.

The man who has 22 Grand Tour stages to his name, including 11 at the Tour de France, could be back among the top fast men next year. He wouldn't be drawn on details of his calendar.

"Nothing changed about the [ambition]," says Greipel.

"The confidence of the management is there as well. Even though we have lots of other fast guys here, so if it's not me it's somebody else. It's really important for the team to perform together like that.

"I will start in January and then everything else is open. That was what I asked the team for, to do it this way. Then, afterwards, I can easily make decisions when I've started the season, and we can see how it is."