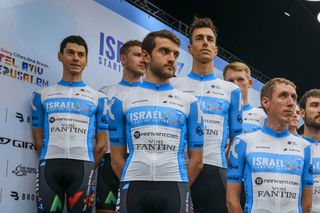 After a breakthrough 2019 season with Elevate-KHS Pro Cycling, James Piccoli is realising his dream and stepping up to cycling's big time with Israel Start-Up Nation. The Canadian met up with his new teammates for the first time at the team's pre-season camp in Israel last week and savoured a "special" atmosphere at the WorldTour's newest team.

Speaking to Cyclingnews at a reception hosted by team co-owner Ron Baron in Tel-Aviv, the Canadian reveled in the new experience, saying that the squad is coming together quickly during their first meet-up.

"I'm so happy to be here and already in a week I've not only been able to tell for myself, but I've heard from several of the experienced WorldTour guys, that we have something special here," says Piccoli. "There are a couple of guys who have done the rounds and were like 'take this in, there's something special here.'

"I chose Israel hoping for a good team environment, that was my choice. Until I got here, I could only speculate what it'd be like, but I was extra-pleasantly surprised when. Some of the people who work here are really open, open-minded, caring, just all the things you want to be a part of in terms of someone at my point in my career, where I still need to learn and grow.

"This is what people have told me, but it's not often that WorldTour teams are very open and forward-thinking and new-school. At the end of the day, to keep progressing I have to choose an environment that allows me to progress, and that's absolutely this team. Their coaches, performance directors, everyone here is just such a good fit with me, it was totally an easy decision."

Piccoli, who turned 28 in September, is making the move from Continental level in the USA to the WorldTour later than many neo-pros, but then again, he took up cycling relatively late too, meaning there's still room to grow.

Back in October, upon signing with Israel Start-Up Nation, he told of how he only started racing in his early twenties, towards the end of a university degree in mechanical engineering. He got his start at Amore & Vita in 2014, then bouncing around a handful of North American teams before settling in at Elevate-KHS for the past three seasons.

The season just gone was his best yet, as the Quebecer won the Tour of the Gila and finished second overall at the Tour de Taiwan, the Joe Martin Stage Race, the Tour de Beauce and the Tour of Utah. There were four stage victories along the way, as well as a first-time participation at the Road World Championships in Yorkshire.

The WorldTour, however, is a different beast altogether, though Piccoli thinks that he's landed in the perfect spot to introduce him to the rigours of racing at pro cycling's highest level.

"I wanted to find a place where I can have a safe space to learn and grow. And Israel really showed that they believed in me, in my short- and long-term capacities, which is really special for a WorldTour team with someone of my age.

"The team atmosphere has been unbelievable. I think that, in general, cycling people don't put enough emphasis on how a good atmosphere creates good performance. People love to measure watts, output, race tactics, but just having a good group of people in an amazing environment is so conducive to performance, and that will show itself this year, I think.

"The real answer is that I don't know, because this is uncharted territory," says Piccoli when asked about what he can achieve in the WorldTour.

Piccoli is among 17 newcomers to Israel Start-Up Nation for 2020, as the team reboots after taking over Katusha-Alpecin and moving up from Professional Continental level.

He's among a handful of riders moving up to WorldTour level for the first time – fellow North American Travis McCabe is another – but the team has welcomed plenty of experienced campaigners on board, including André Greipel, Dan Martin and Dani Navarro.

"I have great guys to learn from," says Piccoli. "There are so many staff who have so much experience, and some of the best riders in the world like Dan Martin, André Greipel and Ben Hermans, who I can learn from. It'll hopefully make this year easier for me to adjust to European racing and do a job for the team."

As well as racing alongside – and against – a new level of competition, there's the races themselves, which are another component of the step up Piccoli will be making. His full 2020 calendar has yet to be mapped out, but the first half looks solid, depending upon performance.

"Sometimes I still can't believe that it's happening. I pinch myself, looking at some of the races I might do next season. It's pretty awesome," he says.

"The first part of my schedule is that I'll start at the Tour Down Under. I'll stay for two more one-days and then the Herald Sun Tour. Then I'm going to go to the Tour du Rwanda, and then Catalunya and Itzulia Basque Country.

"Then if everything it good, and that hasn't been too much then I'll likely start at the Giro d'Italia, which is already a dream come true. As the words come out of my mouth, they still give me goose bumps."

A race like the Giro is a whole new ball game in comparison to races where Piccoli excelled in 2019, though he's confident in his abilities, and feels like three-week racing is where his future lies.

"You don't know until you've done it because Grand Tours are something totally different, but I do think I'd be suited to Grand Tours just based on the way I train and the way my body reacts to training and racing.

"I've always loved Grand Tours and for me that's always been the type of racing that I love the most, so hopefully that's where I see myself one day."