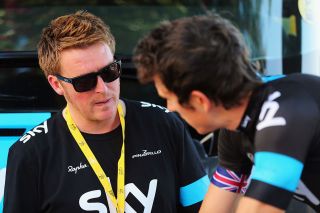 Rod Ellingworth’s enthusiasm is clear from the moment he comes into view at McLaren’s headquarters on the outskirts of Woking. It might be a dreary autumnal Tuesday for most but for Ellingworth this is very much like Christmas and a honeymoon period rolled into one. And who can blame his attitude? After all, having spent over a decade under the wing of Dave Brailsford at Team Sky, Ellingworth finally has the team, the resources, and the opportunity to stamp his legacy on a WorldTour team for the first time.

“This was an opportunity that I couldn’t say no to,” Ellingworth tells Cyclingnews as we walk along the McLaren concourse, and through a shrine of illustrious Formula 1 vehicles decked on both sides.

“It was because of this place and thinking that I’m here. If we can get the balance right at the right time and at the right speed, then this could be quite interesting.”

Interesting is something of an understatement. Bahrain-Merida – as they are currently known – have the potential to become a WorldTour superpower. However, they have underachieved since their inaugural campaign of 2017. For too long, and on too many occasions, they relied on the brilliance of Vincenzo Nibali. The Italian’s departure has sparked a recruitment drive, but the team also failed to get the very best out of Rohan Dennis, while too many of their ranks have teetered towards greatness but without making that final step. However, what Ellingworth walks into is a squad that has the financial and technological resources to compete with the elite. He has a three-year plan, a prince’s purse and the final say on rider recruitment. He has, ultimately, the chance to prove that he can lead a team to the pinnacle of the sport and win a Tour de France.

“People have asked me why I wanted to leave and if there was a problem [at Sky – ed.] but there was no problem at all. I just saw this opportunity, and I said to myself that I’d do ten years there. At the same time, I had this feeling that maybe I was doing the same things again and again. I just needed something fresh and new.”

Team Sky confirm that Ellingworth will join Bahrain-Merida in 2020

‘Landa can win a Tour’

And Ellingworth will certainly need his squad to elevate themselves if they are to reach the goals that have been set. Mikel Landa has regularly flattered to deceive in Grand Tours, while Mark Cavendish is three years from his last successful season. Nibali has left and Rohan Dennis – arguably one of the most gifted riders of the last ten years – walked out during the Tour and will never race for the team again.

“I’d say I’ve had a say in around 80 per cent of the roster for 2020 and I have total control and autonomy going forward,” Ellingworth says, after he is asked about the rumours that Landa’s signature was secured before his arrival.

“But I’ve a three-year strategy around performance and where we want to be. So I believe that there’s quite a difference between podium and winning at the Tour. I’ve been fortunate enough to be inside a winning team on quite a few occasions and see how that develops, and the workloads.

Whether Landa is the rider to deliver Grand Tour success remains to be seen. At Astana, Sky and Movistar there was always someone ahead of him in the pecking order, even when there perhaps shouldn’t have been, and while the Spaniard certainly has the physical capabilities to challenge for podiums he always seems to be playing catch-up. At Bahrain, however, those excuses will not wash.

“Do I think we have a Grand Tour winner? Yes, I think so. Mikel has been bubbling there but he’s never had such a clear run before. There’s always been potential distractions. It’s a big role for him, being that sole leader but I think he can win on the right terrain and I think that the Tour route is pretty good for him.”

As for Dennis's dismissal from the team, and the still unresolved arbitration, Ellingworth is acquiescent to the situation and how it played out. That position may change after a resolution has been reached over Dennis’ contract dispute but Ellingworth admits that he planned to have the world champion in his ranks when he joined Bahrain.

“He’s a quality world-class athlete and I’ve been aware of him for a few years. Who wouldn’t want him on the team from a pure ability point of view? When you’re also trying to put a Grand Tour team together, anyone who can team time trial like that, climb and get second on GC in Suisse, they’re your ideal bike riders. He’s a bit like Geraint Thomas, who can do a bit of everything.

“I made sure that I had space for him but didn’t get involved in the day to day running during the season. My involvement has been minimal on what happened with Rohan but I did talk to him. He was part of the strategy to go forward but it is what it is.

Controversies over human rights and doping

The Dennis episode is not the only strife that has befallen Bahrain McLaren since their inception. The team was hit with questions over the Bahrain regime’s record on human rights abuses when they formed in 2017. Kanstantin Siutsou returned a positive EPO test in 2018 and was subsequently fired, while Kristijan Koren and Borut Bozic were both dismissed for their links to the Aderlass doping investigation. The UCI indicated to Cyclingnews earlier this year that Milan Eržen was also a person of interest, but the managing director denied reports linking him to Aderlass and has since been handed an enhanced role within the senior management. The UCI has also not made any ruling against Eržen or launched an official investigation.

How does all of this sit with Ellingworth? After all, he was part of zero tolerance club at Team Sky, and he famously tore out pictures of Richard Virenque from his Tour de France guide owing to the Frenchman’s years of cheating. Can one be moralistic when it comes to doping only when it suits and where does an individual's moral compass extend to?

“That was more of a personal thing,” Ellingworth says regarding Vireneque as he faces up the topic.

“I was racing in France at the time of Festina and you’d see Virenque floating around at races and you’d think ‘hang on mate, keep your head down because you’ve done what you’ve done’. At the end of the day it was someone who didn’t do the right thing for the sport. That was that moment.

“But my job is to come here and do the performance, lead the team and try and win bike races. It’s about influencing others, and kids, and that’s a huge passion for me. From a Bahrain point of view, you’d have to talk to others about politics because I’m not that guy who is going to get into those things. I’m here to win bike races and that’s it. What really hooked me into this team with McLaren was that it was a team in its young years and that there was an opportunity here to get into something. I didn’t hesitate at all.”

“Not really,” he says when asked if he had reservations about joining the team.

“Because it’s about creating something new. We also have to accept that we work in this sport and there’s that history. That history will keep coming back at us and there will be the odd rogue who goes out there and things happen, unfortunately. We can try our best as a team and we sit firmly in those rules. I didn’t have any concerns at all though, not in the slightest.

“There’s no active investigation with Milan that we’re aware of. He’s very well connected with the Bahrain side of the team and this team, and its formation was his baby in a way. The guy works relentlessly and he’s part of the direction and strategy for the team. Previously he was the main man on the team, and he got the team up and running. Now it’s structured slightly different but he’s still a big player. He has every right to be, and, going back to Aderlass, it’s all reports and there’s no direct link.”

The most important link for Ellingworth in the near future will be his appointment at Bahrain McLaren and their subsequent levels of success. They have set the bar high with their investment and restructure, while their aim of winning the Tour de France is one shared by every other elite team in the peloton. They have a long way to go but with Ellingworth at the wheel, they at least won’t have to ask for directions.

“I just want to do a bloody good job,” he says as we wrap up our interview.

“For me success is about momentum and showing that we’re really moving in the right direction on our road map. We’ll have ups and downs, there will be clashes, and there’s a lot to do but that’s what I’m looking forward to.”