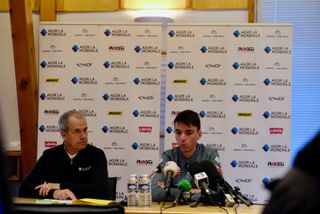 Romain Bardet has never been pressured into choices concerning his race programme, according to AG2R La Mondiale boss Vincent Lavenu.

Bardet and Lavenu sat side-by-side on Wednesday to announce the 29-year-old would make his Giro d’Italia debut in 2020, skipping the Tour de France entirely as he also targets the Olympic Games, Vuelta a España, and World Championships.

Speaking to Cyclingnews at the team’s pre-season gathering in Vaujany just after the announcement, Lavenu admitted Bardet had “dreamed about riding the Giro" for a number of years.

However, his seasons have all been geared around the Tour - every edition of which he has ridden since 2013 - and the only other Grand Tour appearance of his career came at the 2017 Vuelta.

There have been suspicions that, as the French star of a French team with a long-standing French title sponsor, Bardet has been deemed indispensable to the plans for what is clearly the most important event of the year.

"We’ve argued before. It hasn’t happened often but at times we’ve had different visions on what path to take, but we’ve discussed it, reasoned why, and reflected. On some occasions we’ve chosen the path and on other occasions he’s chosen it for himself, but we’ve never imposed on him or told him he has to do something. That’s not the best way to manage an athlete and especially not someone like Romain."

Likewise, Lavenu insisted that, while the title sponsor - an insurance firm that has backed the team since 2000 - might prefer to have the star rider at what is overwhelmingly the biggest exposure opportunity of the year, they don't have a say in sporting decisions.

"AG2R La Mondiale trust us, and always have. They’ve never got involved in rider recruitment, or in strategic decisions. We always inform them when we recruit a big rider or make a big decision – there are exchanges – but they respect the way we run the team. The sponsorship side and the sporting side are kept separate, and that’s a balance we’ve found with them for a long while now," Lavenu said.

"We told them a few months ago that Bardet might plump for the Giro, but that we’d need to wait for the parcours to be revealed, wait for the disappointment of the Tour to pass. In the end, the decision we came to confirmed that idea. We simply informed our partners that’s how it would be. We’re lucky to have partners like AG2R La Mondiale who don’t interfere in the sporting side. Now it’s up to us to show we made the right call. The ball’s in our court."

There was some suspicion Bardet would make his debut at the Giro but also ride the Tour, albeit in less of a leadership capacity. However, the Frenchman insisted he couldn’t see himself being at the Tour doing anything other than fighting for the yellow jersey. Furthermore, he feels he’d be compromising his preparation for the Olympic Games, which take place on a hilly Toyko course less than a week after the Tour concludes.

He also wants to target the World Championships, which take place on a similarly hilly course in Switzerland, and he feels the Vuelta would give him the perfect build-up to that. Coupled with the calendar concerns was Bardet's feeling he'd hit a wall at the Tour and needed something new, even if the Giro route and its three time trials seem less suited to his skills than the climber-friendly Tour.

"It’s a big decision, but it’s part of his career trajectory. Romain wants to discover other things and to feel… I think he’ll feel liberated, finally being able to ride the Giro, which he’s dreamed about for a number of years. The opportunity has never presented itself but next year is the right moment," Lavenu said.

"It’s seven years now that he’s done the Tour de France, and it follows his experience in this year’s Tour, which he found very difficult to take. All that made him say ‘it’s time to do the Giro’. We took that into account. Evidently, the parcours for the Tour is well suited to Romain, but there are other elements, among them the mental balance and motivation of the rider. He’ll perform better if he wants to do something than if he’s forced to do something."