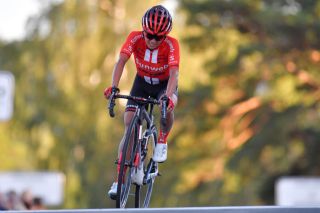 In 2017, Coryn Rivera landed in Europe for her first full elite season on the continent, and in no time at all she had conquered all before her, with emphatic wins in Trofeo Alfredo Binda and the Tour of Flanders. It was a seminal spring in the American’s already glittering career.

The last two spring campaigns have seen Rivera fall somewhat short of her lofty expectations, with illnesses and crashes knocking her off her stride at certain points. In both 2018 and 2019, it took until the early summer for the 27-year-old to find her footing and start to pick up wins, but Rivera is looking to hit the ground running in 2020.

"I have the same goals, so I’m targeting the spring and that’s part of the qualifying period for the Americans for the Olympics. I’ll be racing all the way through to the Worlds," she told Cyclingnews at Sunweb’s recent team launch in Amsterdam.

"This year I didn’t have the spring that I would have hoped for. I had some illnesses and some crashes but that’s just how it is sometimes. There are things in racing you can’t always control. I came back, though, and had a good summer, and then took 10th at Worlds. That wasn’t really what I wanted but it was still a strong showing."

Don't be afraid of the elements

The emotions of winning the Tour of Flanders

72 US national championship titles, and counting

Rivera came to Europe on a full-time basis in 2017 as part of the Sunweb team. Although she was an undisputed talent on the road at that stage – and had raced many of the Classics the year before as part of a US team – few expected her to land two major one-day races so quickly after moving.

"When I look back to my last three years in Europe there’s no perfect science to it," she said when asked to compare her spring campaigns.

"I had the least amount of bad luck in 2017 and it’s all about how things fall together. I actually don’t think it’s about luck, and it’s more about how many negative things are coming in. There’s no formula to have the perfect spring. You could come in with great condition and just have a crash."

Part of the reason why Rivera has not reached her 2017 heights could be down to the fact that in her debut season most of the experiences were new and the level of expectation was lower than it is today.

"Also, it was my first year and I was trying to prove that I could start well and that I wasn’t a wimp or whatever. There’s a little bit of that added to it. Then, in the second year, I set the bar pretty high the year before and that made it hard for myself to do the same or do better."

Rivera’s full calendar of racing in 2020 has yet to be confirmed, with Sunweb set to announce rider rosters for several main targets at a training camp in Calpe, Spain, next week.

One event that Rivera certainly has her heart set on is the Olympic Games road race in Tokyo in the summer. The American narrowly missed out on selection in 2016 for the Rio Olympics but is determined to be on the four-rider roster next year.

"I always wanted to go as a kid and I got close to going to Rio. It’s looking good for me, though. I just hope to have a good healthy spring and show myself. It’s hard to say what my role will be because we’re going to be a team of four, so it’s not like a normal race."