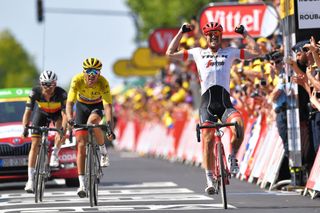 Philippe Gilbert has backed John Degenkolb to return to winning ways after joining the German at Lotto Soudal. The pair have never raced together but will ally in next year’s spring Classics after joining the Belgian team from Deceuninck–QuickStep and Trek Segafredo, respectively.

Degenkolb’s time at Trek Segafredo had several successful moments, none more so than his dramatic and emotional stage win at the Tour de France in 2018, but the German was unable to roll back the years and win a Classic that would have added to his collection of Milan-San Remo, Paris-Roubaix, and Gent-Wevelgem.

In 2019 he finished second to Alexander Kristoff in the Belgian one-day race.

Gilbert, who is looking to complete a set of Monument wins at Milan-San Remo in 2020, backed Degenkolb to return to the pinnacle of the sport and pointed to the accident the German suffered in 2016 when he and several Sunweb teammates were involved in a head-on collision with a car while out training.

Giant Alpecin left in shock after head-on collision with vehicle

Degenkolb: Gilbert and I want to take Lotto Soudal to a new level

Degenkolb looking forward to Lotto life with Ewan and Gilbert

John Degenkolb: So much pressure has fallen off my shoulders now

“I believe in him and a lot of people forget that he had that accident when the car hit him,” Gilbert told Cyclingnews and other members of the press at Lotto Soudal’s training camp in Mallorca.

“Sometimes I see some comments saying that he’s finished but they forget what happened. He had many operations and I think he lost confidence and the team he was with didn’t really help but if we help him with his confidence then he’s going to be back. I don’t think he’s lost his capacities or his potential. He showed that he’s still good when he won his Tour stage. I hope that we race a lot together and I hope that he wins more too.”

Gilbert arrives at Lotto Soudal having left the team in 2011 for BMC Racing. He returns to a completely different roster but one that is expected to challenge for top honours during the spring. Along with the veteran Belgian, the team has Degenkolb, Tim Wellens and Caleb Ewan within their ranks.

“Degenkolb has won and Wellens has won races and has his characteristics. At Opening Weekend we’re going to start with a really strong team. It will be a similar situation to how things were at Deceuninck–QuickStep because we’ll have three leaders.”

Gilbert left Deceuninck–QuickStep after three successful seasons that included wins in the Tour of Flanders and Paris-Roubaix. He admits that he initially requested to stay at Deceuninck–QuickStep but when team owner Patrick Lefevere was unable to offer a two-year contract Gilbert looked for greater security on another team.

“I wanted two years but Patrick didn’t want to give me a contract that long. Then I was speaking to John Lelangue and we spoke about a three-year contract and I thought it was right to go for it. Three years is really long but it gives me the chance to win more races.”

The comparisons between Lotto Soudal and Deceuninck–QuickStep are likely to dominate the next few months as the season builds towards the Classics and Gilbert – who has ridden for both teams – remained on the fence when it came to choosing who would be the strongest.

“They’ve changed too. I’ve left, others have left and they were dominant because of what we were together. Now it’s different, so we’ll see. Maybe another team will be dominant. One team is always a bit better than the rest but in 2020 I don’t know who it’s going to be. It could be Bora, us or Jumbo Visma and we’ll see that quickly at the first races.”