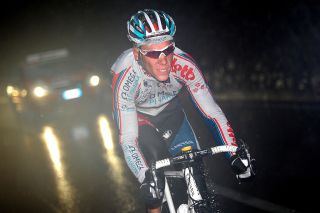 Philippe Gilbert on his way to winning his first Monument in 2010 (Image credit: Getty Images)

At the end of the 2011 season, Philippe Gilbert departed Omega Pharma-Lotto and set sail on an eight-year voyage that stretched across BMC Racing and then QuickStep. Finally, after all those years away he’s returned home. Yet the 37-year-old finds a very different team to the one he left all those years ago.

The roster is virtually unrecognisable; the management a little thinner and greyer on top, and Omega-Pharma has been scrubbed from the livery to be replaced by Soudal. Little has stayed the same, and even Gilbert has changed – or adapted as he explains. And according to the multiple Monument winner, it’s that dedication to evolution that has kept him at the peak of his powers for all of these years.

With the hope of winning Milan-San Remo and joining an elite club of Rik Van Looy, Eddy Merckx and Roger De Vlaeminck, Gilbert will need to be at his adaptive best this season if he is to achieve his greatest landmark.

“I was here for three years, in a similar team with Lotto and they’re a sponsor that remains, but this project is completely new but I’m happy to be part of that now,” he says after a long day in the saddle on the island of Mallorca.

Philippe Gilbert: The five races that changed my life

Adaption can take many forms in sport but it’s worthless without the key element of dedication. That is perhaps Gilbert’s main strength as he heads towards the final years of his tenure at the top of the sport. For instance, on a day in which most of his teammates took in a relatively light spin around Balearic island, Gilbert and a handful of colleagues crunched out a six-hour training session.

By the time Gilbert arrived back – alone of course – the sun had almost set. A cynic might pose that this brutal ride was simply a self-prescribed medicine designed to cut short a batch of media obligations, but when Gilbert finally arrives he’s as amicable as ever.

“I’ve had to adapt, maybe not 100 per cent, but if I hadn’t then I wouldn’t have been able to stay at this level. If you want to stay at the top for a long time then you need to adapt,” he says when the longevity of his career comes up in conversation.

“But racing has adapted too. Now racing is a lot more controlled. There are more sprinters in cycling. The goal of 70 per cent of the bunch is to arrive for a sprint at the end of the race. In the past that was the goal of just Cipollini and Petacchi, just two teams, and the rest were attacking. It was 18 teams wanting a sprint against two.

“But everything is easier now. There’s a lot more science behind everything, and they collect a million more pieces of data. The trainers get smarter so that makes it easier. Before there was more guessing, and you were never sure about reaching the right level. Now you know what speed you’re going to take a climb in three weeks.”

Not that Gilbert has entirely embedded himself with the modernity of professional sport. The former FDJ rider who burst onto the scene in the early 2000s still holds something in his heart for more old school methods.

“I still sometimes work without a power meter, and I like that. When that happens I get the trainer calling me to ask if there’s something wrong, but those days are good for the head.

“When you like cycling it’s easier to do it for longer. I like these moments, like now when you’re building the condition and you’ve had your rest. You start with a low base but then there are these moments when you see the really quick evolution of your form. First, it’s three hours, and then a month later you can do six hours fast. Every time it’s a challenge, but it doesn’t get harder to perform at a high level. It’s hard to still win, but I just try and do my best. Being in the final is not that difficult in a race but winning is difficult.”

For now, age appears to be no barrier, especially when you consider that Gilbert signed a three-year deal when he linked up with Lotto Soudal and two of his previous managers, Marc Sergeant and John Lelangue, who oversaw Gilbert at Lotto and BMC respectively. Gilbert will be 38 in July.

“Everyone is different,” Gilbert says when asked about his age.

“Some guys stop when they are 30, but it’s about more than what’s in the legs, and my head is really strong. I have no problems there. You’ve had guys like Horner, Voigt, and Hincapie who have been on a high level. There are others who were not as famous so we don’t speak about them, but I’m not the exception. Spend 10 minutes on the internet and you’ll find 20 guys like me."

You could spend a lot longer on the world wide web and struggle to find a rider over the past 20 years who have been able to flourish in as many different ways, and over as many alternate terrains, as Gilbert.

After all, he is a rider who has collected Monuments and titles throughout his career and but for a Classics lull during his BMC days – has been a consistent winner. The doubters, and there were many, claimed he would never win the Tour of Flanders, that he couldn’t win Paris-Roubaix but he ticked them both off his bucket list in the space of three spring campaigns.

His adaption for a race like Roubaix, for instance, was remarkable in itself.

In 2020, the Lotto rider will turn his attention the final Monument missing from his palmares – Milan-San Remo.

Arguably considered the hardest to win of the five Monuments, Gilbert will find his work cut out for him come next March when he has to contend with faster finishers and more explosive climbers.

“Milan-San Remo is the ambition but it’s going to be difficult. I’m going to try, as I did in the past. Everything is important, but if you don’t have the legs you’ll never win. I could have Eddy Merckx in the car behind me, and he won the race seven times, but if I don’t have the legs, then it’s not going to happen.

“But I think I’ve done I’ve done that race 15 times and I’ve seen the race end in five or six different styles or scenarios. I was there when Pozzato won from the breakaway on the Cipressa; I was there when Nibali attacked on the Poggio; when Cancellara attacked in the last kilometre; and I’ve seen so many different finals that it’s hard to know which one is the best for me.”

Gilbert started his Monument collection back in 2010 with his first of two Il Lombardia titles. A career-defining Liege-Bastogne-Liege and Ardennes week domination followed a year later before the Tour of Flanders and Paris-Roubaix were added.

Whether Gilbert can successfully navigate the final part of his career and land a Milan-San Remo title is still an unknown but at the very least he has three years to try. Gilbert may have found a home at Lotto Soudal but his odyssey continues.