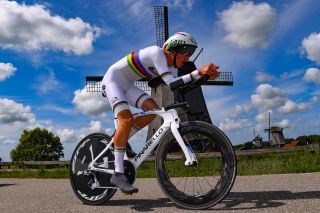 Under-23 talents graduate to the professional ranks with varying degrees of expectation, but the spotlight on Mikkel Bjerg couldn’t be much brighter. The Dane has won the World Championship time trial title at U23 level three years on the trot, and has his sights set on becoming the best time triallist in the world, of any age.

After a season in which Egan Bernal became the youngest winner of the Tour de France in 100 years, Remco Evenepoel won WorldTour races and elite titles straight from the junior ranks, and Tadej Pogacar won three stages and placed third overall at his first Grand Tour, young talents are taking less and less time to hit the heights.

Bjerg, who will turn pro with UAE Team Emirates, sought to play down any sense of pressure when speaking to Cyclingnews at a December team training camp in Spain.

"When guys like that make massive results in their first year, it motivates me a lot, but it doesn’t add any pressure," he said.

"The stories of Bernal and Evenepoel, they’re one in a million – not every neo-pro goes and wins the biggest races."

That said, Bjerg is hardly self-effacing when it comes to measuring his own ability and acknowledging his own ambitions.

"I think I’m within the 10 best guys in the world now in the time trial," he said.

If he’s already in the top 10, without having turned a pedal as a pro, the ambition is, naturally, to be the best.

"I'm striving to be the best and that’s what motivates me," he said.

"I look a lot at the data. At Worlds, it’s difficult to compare, because the U23’s race on different courses to the pros, but last year at the Danish championships, I could see the level of Kasper Asgreen there. I could see my power that day and what I needed to close the gap to Kasper. Hopefully the next few years I will progress and be the best."

Bjerg will make his professional bow at the Tour Down Under in Australia in January, where he’ll be working for Jasper Philippsen in the sprints. He’ll get a first chance of his own when he lines up at the Volta ao Algarve in February, where he’ll be able to measure himself against the rest in his first time trial as a pro.

He’ll then race some semi-Classics in Belgium before it’s decided whether he should be parachuted into the squad for some of the major one-day races.

"The Classics are something that motivates me, for sure," Bjerg said.

"Often you need to mature a bit before you can excel in the Classics. They’re so long that maybe when you reach the final 50km, as a neo-pro, you’re out of gas. When I see the Tour of Flanders on TV, it doesn’t look that hard, but I’ve done the U23 Flanders and that was so hard. I can maybe be good there in the future, but at the moment it seems like a really good jump. Just going to Flanders, without finishing it, would be a really big experience."

Bjerg is keeping quiet on the matter, but 2020 could see an assault on the UCI Hour Record spring up at any moment.

He had talked of taking on the record, set by Victor Campenaerts in April with a distance of 55.089km, this autumn, using his form from the Worlds to see how far he could go. He later revised that to a non-UCI-accredited attempt at the Danish Hour Record, which was taken from him by Martin Toft Madsen earlier this year (53.975km), but that was shelved due to illness.

At Worlds, Bjerg said he’d attempt the official record at some point during his three-year contract with UAE, but

"It’s a work in progress. If it’s possible to beat it next year, we’ll find out during the season and hopefully the team will support it 100 per cent," he said.

"We’ll take it as it comes but, if the shape is really good and I can beat it this year, I don’t see why I should wait. The longer I wait, the biggest the chance Rohan Dennis will come along and smash it out of the ballpark.

"The Hour Record is just one hour at threshold. If you want to do a good one, you should focus on it for a couple of months beforehand, for sure, but it doesn’t vary that much from a racing calendar. From my persepctive, you could do a WorldTour race three weeks before and still do the Hour Record. It’s not like you have to modify your training to focus only on the Hour Record."

In any case, the Hour Record is a useful indicator for where Bjerg wants to progress as a time triallist. Despite shining on Worlds courses that have combined punchy ramps with faster sections, he wants to “strive more towards the Hour Record type of TT effort".

The Worlds in Aigle-Martigny next September are a good place to start, with the time trial taking place on a flat 46km course along the valley. Towards the end of his first season, it will give a true indication of how he matches up to the world’s best on the biggest stage of all.

"That’s a big ambition for next year – I really want to do well at Worlds," Bjerg said, marking out Dennis, winner of the past two titles, as the benchmark.

"He’s the guy to beat, and probably at Ineos he’s not going to get worse."

Bjerg, however, should only get better. Can he be the best? Only time will tell.

"If in the end it’s not possible, I’ll have given it my best try and I want to be proud of that," he said.