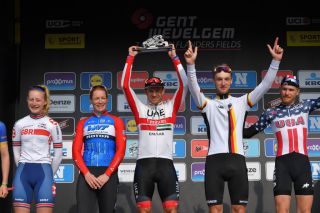 Jonas Rutsch put his name on the map during the spring with a huge win in the U23 version of Gent-Wevelgem. The result helped land the 21-year-old German a two-year deal at EF-Education First, and at the team's winter training camp in Girona the neo-pro sat down with Cyclingnews to tell us his story so far.

Jonas Rutsch: My father went to the same East German boarding school as Jan Ullrich and Jens Voigt. He nearly became a pro cyclist but had a knee injury that forced him to stop but later in life he started mountain biking and that's when I began to ride as well. I started with mountain biking but also did some speed skating and some ice-skating during the winters.

It came to the point when my father told me I was too big and tall for mountain biking and that I should see how I handled the road. I was about 13 or 14 at the time and immediately had some success.

CN: Who was your sporting hero growing up?

JR: I didn't really have any heroes. I watched the Tour de France when I was growing up, and there was Jan Ullrich, but I never had these 'heroes' so to speak. Instead I preferred to go my own way. I follow triathlon and I watch a bit of track and field but no one stands out as a hero.

CN: How did you make the step up to EF-Education First?

JR: This year I won the U23 version of Gent-Wevelgem. At the start of the winter I focused all my training on that race and worked really hard. At the start of the race I knew that I could win because my preparation went so well and winning that race opened up the door for me. I targeted that race because if you look at me I'm that typical Classics rider. I'm tall, I'm strong, and a bit heavy but to too heavy. Also, winning earlier in the year really helped because it got me noticed and it took the pressure off for the rest of the year.

There were two other teams that showed interest in me but EF-Education First was the first one that became concrete. More importantly I like the vibe and the atmosphere from the very first moment. They're cool, so it was a perfect team for me.

CN: What's the biggest result you've had so far as a rider?

JR: It has to be my result in Gent-Wevelgem but before that I was second in the Eschborn-Frankfurt U23 race in 2018. I performed well in the national series in Germany but the big international success came in Belgium this spring.

CN: What style of rider are you?

JR: Maybe I can develop more in stage races as I drop a bit of weight and get older. I also think that I can make huge gains in the time trials because right now I don't think I'm very aerodynamic. I've never had a bike fit so until now all I've done is just sit on a bike and pedal as fast as I can. I'm really looking forward to my first bike fit here but so far it's been great. The team are really friendly and even though I'm a bit nervous I think those feelings are normal. I'm sharing a room with Tanel Kangert at the camp and he's really experienced and has been useful when it comes to passing on information and tips.

CN: What are your aims for your first season?

JR: Learn a lot and learn fast. I don't have specific goals other than that. My first race will be at the Tour Down Under and I'll do the Australian block of racing before coming back and racing the Opening Weekend. I've not been to Australia before, the furthest I've been from home was Qatar in 2016 for the junior Worlds, so I'm really looking forward to my debut.