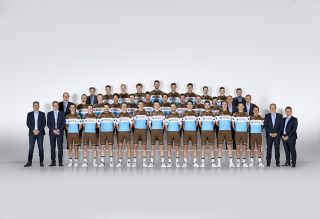 AG2R La Mondiale presented their 2020 roster in Paris on Tuesday, with the French team of Romain Bardet remaining true to its midcentury modern blue and brown kit for the coming season.

Lavenu looked back at a successful 2019 season that included a Giro d'Italia stage win by Nans Peters, Bardet's polka dot jersey in the Tour de France and five victories from Benoît Cosnefroy in addition to Oliver Naesen's podium finishes in Milan-San Remo, Gent-Wevelgem and Paris-Tours.

"The 2019 season has allowed Oliver Naesen to get even closer to the best classics racers. He showed exemplary consistency and mental strength," Lavenu said. "He is capable of taking a very big victory, and we will support him in order to achieve this common goal.

"The 2019 season also saw the emergence of alumni of the Chambéry Cyclisme Formation with Benoît Cosnefroy and his five victories, as well as Nans Peters who put on a display of a great athletic performance on the roads of the Giro d'Italia to win his first professional victory. And Geoffrey Bouchard, in his first year as a professional, was the revelation at the Vuelta a España, finishing with the King of the Mountains jersey. He is in fact the first rider from our team to have stood on the final podium at the finish of the Vuelta."

Bardet was the team's GC hopeful for the Tour de France but fell at the first hurdle. Lavenu praised the 29-year-old for rising above his difficulties and bringing home the mountains jersey.

"This jersey crowns our consistency at the Grande Boucle, but it especially illustrates Romain’s strength of character," Lavenu said. "It’s a strength that enabled him to get up when others would have given up, and which, I am sure, will guarantee him great success ahead. I note finally, the tremendous solidarity of the entire team throughout the season, which make these individual performances collective victories."

The team is one of the longest running in the peloton, sponsored by the same financial firm since 1997 when AG2R became a co-sponsor with Casino.

"While we are entering the 29th season of our history, there are still many beautiful pages to write," Lavenu said. "This continued progress through the seasons is only possible with the faithful and fraternal support of a partner like AG2R La Mondiale, which will be our sponsor for the 24th season. We work together daily with the common belief that the greatest success are at hand. Over the years, we have built a mature, strong, and united group."