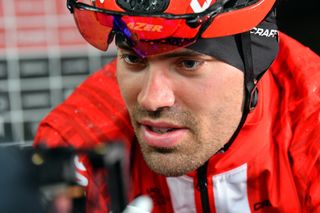 Nearly 300 kilometres from home, and on the outskirts of Nancy in France, Tom Dumoulin brings his car to a sudden halt. There’s still the matter of another 600 kilometres and the long climb to the summit of La Plagne ahead of a pre-Tour de France training camp, but all of that is irrelevant right now as the 2017 Giro d’Italia champion navigates his next move.

Barely able to bend his knee, unable to mask the pain from the surgery that took 24 hours earlier, and with Tour is just weeks away, Dumoulin can finally see the writing on the wall. He reaches for the phone and when the voice at the end of the line begins to answer Dumoulin doesn’t hesitate. It’s over. He’s turning back.

Whether that moment in late June was the point of no return for Tom Dumoulin and his alliance with Team Sunweb is still unclear – he’s not even sure himself – but it certainly felt like a change in relationship between rider and team.

While it created plenty of headlines at the time and a painful divorce, Dumoulin appears to be in a much healthier place both physically and mentally when he meets with Cyclingnews at the Jumbo-Visma training camp in Spain.

Dumoulin looks refreshed and reinvigorated. He’s lean, shows no discernible signs of his injury but for a scar, and walks with a smile on his face as he jokes with his teammates. During the customary photo-shoot with a clutch of Jumbo Visma co-leaders, he pokes fun at Primoz Roglic’s off-season leg hair length and laughs along with the rest of his cohorts when they’re asked to pose on the beach while bemused locals watch on. He looks at home.

Back in the team hotel and Dumoulin’s demeanor remains laid-back and carefree – a far cry from the last time we met. Back then, at the Criterium du Dauphine in June, Dumoulin was masking the true nature of his injury and putting on a brave face when it came to the Tour. He appeared tense, unhappy and as if the weight of the world rested on his shoulders.

He never made it to the start of the Tour, he never raced in Team Sunweb colours again but he found peace of mind after a chaotic period in his cycling career.

“It’s been eventful,” he jokes when asked if anything major has happened in his life over the last six months.

“The year had two sides. In one way it’s been really disappointing but on the other side, it’s been liberating. The last couple of months, since my operation, actually, have been really nice. I really enjoyed my time away from professional cycling and I’m really energized again for the coming years.

“This whole period has been liberating for me, on a mental side, and being able to take a step back from professional cycling.”

That feeling of liberation came in the form of two holidays – one of each of the surgeries carried out on his knee – and a period of reflection in which he could ride without a power meter and spend time at home with his wife and family. For a rider who has been pushing the bar of excellence that little bit higher every year for almost a decade, the break from the intensity of elite sport was hugely welcome.

"For about ten years I’ve been focused on winning races and getting better every day. After ten years I was slowly feeling how demanding it was, and that I could do with a little break. In the end, I was forced to take one, which I didn’t like in the beginning but I found it liberating during that period. But in that eight to ten years it was all about winning, my condition, my weight, the pressure, doing interviews and the commercial stuff. This was the first period is those years when I didn’t have those things.

“So when I was off I rode because I love riding my bike and it wasn’t about getting better. And of course, I worked on the injury and spent time at home with my wife but most of all I was riding my bike just for the joy of riding. There’s nothing better.”

Dropping the bomb at Team Sunweb

Those feelings of content and fulfillment were a long way removed from the final few months of Dumoulin’s time at Team Sunweb. He stresses that his time there was still successful – and his palmares during that period is almost second to none in today’s modern peloton – but the atmosphere and professional relationship had reached breaking point by the time he decided to cut all ties.

“For quite a while I wasn’t feeling happy at the team and how it was going with me,” he says.

“Eventually I needed to somehow drop the bomb that I didn’t see a future for me in the team anymore. I had to talk to Iwan Spekenbrink, face to face, and eventually, I had to make that move. He was disappointed to hear it, and I had a two-year contract. It was difficult to work something out but eventually, but we managed it. I didn’t really have a solution in place when I talked to Iwan but in my mind, I pretty much knew what I wanted.

While Dumoulin is itching to move forward and re-start his career at Jumbo-Visma, there are still plenty of questions relating to his 2019 campaign.

That’s partly because he has given so few interviews over the last few months, and because typically when a rider breaks his contract with Team Sunweb – whether it’s Warren Barguil, Marcel Kittel, Edward Theuns or now Dumoulin – there’s usually an absorbing backstory.

“After the Dauphiné the plan was to still go to the Tour. I went from the Dauphiné and flew straight to the hospital for an operation. The next day I set off for an altitude camp to prepare for the Tour,” he says of that fateful car journey and his Nancy turn around.

“I drove myself to La Plagne but on the way there I thought ‘what the hell am I doing because I can't bend my knee. What am I going to do on the mountain and what can I do at the Tour?’ That was actually the first moment that I sat alone in my car and I was actually thinking about the whole situation and I realized that it was never going to end well. So I drove home again. It was a 600-kilometre round trip but I knew then I wasn’t going to do the Tour.

“That was back in late June, and that was a strange period with all the talks going on about moving teams and the knee injury. That wasn’t the nicest time, while the Tour was going on. From the end of August onwards, it was a nicer period.”

With his body recovered, his future decided and his soul refreshed, Dumoulin can finally look ahead.

His Grand Tour ambitions will be announced later this week but right now the Dutchman is making every effort to socialize and fit in with his new surroundings. He has approached every rider on the team as if he were a neo-pro and sees this switch in teams as a chance to kick-start his career.

“I feel immediately at home here. I rode for this team at Continental level when it was Rabobank so I know a lot of the staff, coaches, and riders. It feels really good to be here,” he says.

At a dinner in October, attended only by the main leaders on the team, Dumoulin raised the key issue over leadership – perhaps sensing that some riders may have had initial reservations about him joining Jumbo-Visma.

“We wanted to get that elephant out of the room immediately so I just told the guys that I’m here to be the best cyclist that I can be. The vibe in the team is really good and I don’t want to interfere with anything that’s going on. I just want to be an added value to the team.”

If Dumoulin can reach his physical levels of 2017 and 2018, and if Jumbo-Visma can smoothly incorporate him into their structure then almost anything is possible. And in time maybe Dumoulin can start creating more great memories to add to his collection.