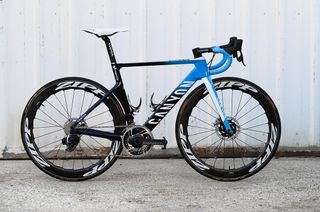 Movistar Team has ended its 37-year long partnership with Campagnolo, and will instead race using SRAM componentry through 2021, in a deal that also sees the entire team switching to disc brakes only.

The Spanish outfit, who operate in both the men's and women's WorldTour, will continue to ride Canyon Bikes, however, they will be equipped with SRAM componentry, including Quarq power meters and Zipp wheels.

"After 37 years, we are switching to SRAM and Zipp," said team manager, Eusebio Unzué.

"This is a historic change that we do not take lightly, but we see a great opportunity to partner with technology leaders in drivetrain and wheels."

The entire team will be equipped with SRAM's 12-speed wireless RED eTap AXS HRD groupsets, which can be set up using both a 1x or 2x chainset and comes with a choice of chainring size options. According to SRAM, the women’s team will predominantly ride 48/35 chainrings, the men opting for 50/37, with both teams preferring the 10-33 cassette.

"I look forward to racing on the new AXS gearing ranges," said Enric Mas. "The idea of smaller steps between the gears should benefit a rider like me who relies on a consistent cadence when I time trial or climb."

Alongside SRAM groupsets, the Movistar team will have the entire Zipp Firecrest and NSW carbon wheels lineup at their disposal, along with Quarq power meters.

Alejandro Valverde added: "I have been very curious about SRAM and Zipp for many years, and I am excited to be a part of the SRAM family. The componentry and the technology, the support, and how well they listen to the riders is unique and impressive."

Movistar will be one of just two Men's WorldTour teams supplied by SRAM for the 2020 season, with Trek-Segafredo being the other. Cofidis Solutions Credits' step up to the WorldTour sees Campagnolo retain their status quo of three teams, while Shimano retains the vast majority with 14 teams using its components.