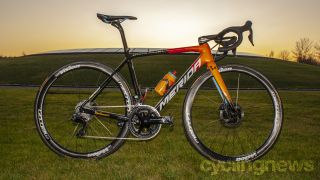 Despite relinquishing its role as title sponsor, Merida has confirmed its commitment as equipment partner to newly formed WorldTour outfit Team Bahrain McLaren for the next three years. Merida first entered the road scene back in 2013 with Lampre-Merida in a bid to grow its road cycling presence, a role it continued when the team transitioned to Bahrain-Merida in 2017.

For the 2020 season, Merida will provide the Bahrain McLaren squad with three bicycle options: the Scultura, Reacto and Time Warp time-trial bike. In a bold move and one which echoes the industry's current rhetoric and thinking philosophy, the brand will supply bikes equipped with disc brakes only.

According to Jürgen Falke, Director of Products and General Manager of Merida Bikes, "Disc-brake-equipped bikes account for 90 per cent of our total sales and soon,  rim-brake bikes will be phased out completely from our product portfolio regardless of what the traditionalists think."

"The proof and science is there and rim-brake bikes just don't possess the same levels of performance as the disc-brake equivalent. Now add rain and bad weather and the gap grows exponentially."

Last season's bikes weren't the ugliest on the WorldTour by any stretch but, for 2020, Merida's presence in the peloton will be bolstered by a McLaren-inspired paint livery.

As a result, the bikes will feature the company's famous Papaya-orange colourway - a racy hue that echoes the team's race-winning ethos. McLaren is one of the most successful and winningest Formula 1 and motorsport firms in the world, so introducing this hallowed colour was a natural step for the title sponsor.

However, in an effort to retain some semblance of the team's previous colour scheme, a strip of red and a good helping of black round off the visuals together with a dollop of cyan on the inner fork and saddle rails. It truly is a beautiful bike, its visual presence bolstered by the maker's name on the downtube and tasteful sponsor garnishings on the top tube and chainstays.

Kerbweight is always going to play a huge factor in the pro peloton - especially when it comes to mountain stages of a Grand Tour - and the stigma surrounding disc-brake-actuated road bikes is naturally still a huge concern for many riders. To temper these concerns and validate Merida's decision for going the disc-brake route, the company spent close to a year experimenting with various carbon fibre layering techniques to not only ensure the lightest possible frameset but also improve its crash resistance across the board.

As it stands a Merida Scultura disc, with pedals and cycling computer, will tip the scales at a UCI-legal 6.8kg. The Reacto disc also underwent a stringent diet where nearly 300g worth of lard was shed by trimming a few grams here and there and swapping out various components - the result is a 7.1kg aero road bike. One of the ways Merida managed to save so much grammage was by ditching the Fulcrum Speed wheels for Vision Metron tubulars.

While Bahrain McLaren will start next year aboard the outgoing third-generation Reacto, an all-new version featuring hidden cables and full integration is pegged for a mid-year introduction and launch. With a rumoured 950g frame, there's no doubt we'll be seeing the Reacto ridden at more of next year's races

Both the Scultura and Reacto disc models will feature full Shimano Dura-Ace R9170 builds. This, depending on the rider, will comprise a 53/39 and 11-32T drivetrain assembly, pedals and hydraulic stoppers. As previously mentioned, Vision provides the team with Metron wheels, which are paired with Continental Competition tubular tyres.


Asked about the possibility of the team running tubeless tyres next year, Falke assured us it is the way forward but weight is still a big concern. "There's no doubt that tubeless tyres are faster and provide better comfort. If you look at Paris-Roubaix, the benefits far outweigh what could possibly go wrong but the way forward would be to convince the riders as it's always going to come down to personal taste and what weighs the least."