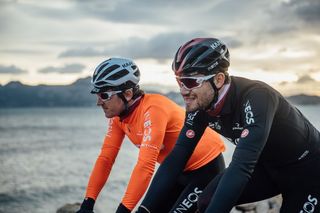 Geraint Thomas showed he is already training long and hard for the 2020 season, riding a 309km loop of Mallorca on Sunday during Team Ineos' winter training camp.

Last year the Welshman struggled to find his early-season form and racing weight after celebrating his 2018 Tour de France victory for several months but appears to have no such problems this year, posting a photograph of his Garmin bike computer which showed he covered the 309.km distance in 8: 35 at an average speed of 36kph.

Several Team Ineos teammates appeared to complete the ride with Thomas, while others did part of the long loop of the Balearic island.

Veteran domestique Christian Knees posted a map of the ride on his Instagram account, while Italy's Filippo Ganna rode 167km in five and a half hours. Michał Kwiatkowski clocked up just 67km and new signing Richard Carapaz rode for 93km. Britain's Ethan Hayter rode 181km in an almost six-hour ride as he prepares for his debut with Team Ineos in 2020.

Geraint Thomas: I believe I can win another Tour de France

Team Ineos began their annual winter get-together last week and are expected to stay until just before Christmas, getting in big blocks of base training and planning and preparing for the 2020 season.

The team traditionally stay in Alcudia, in the north of the island and the 309km loop started there and took in the hilly roads of the north coast towards Soller before heading south to complete the loop. Social media photos the riders finished the loop in the dark after over eight hours in the saddle. Thomas and some teammates have been training on orange flourescent clothing to be seen out on the roads.

Team Ineos are still to confirm their 2020 objective and leadership plans.

Chris Froome has indicated he wants to target the Tour a de France as a recovery goal after the multiple fractures he suffered during the Criterium du Dauphine. Tour de France winner Egan Bernal is has said he would like to ride the Giro d'Italia and the Tour de France. Carapaz is likely to defend his Giro d'Italia title in 2020 but little is known of Thomas' plans and where he now sits in the Team Ineos Grand Tour hierarchy.

Thomas recently became a father for the first time, with his wife Sara giving birth to their son, Max, in early October.

Thomas has hinted he could target the Giro d’Italia in 2020, suggesting that it would "Get him out of bed in the morning."

“I’m going to wait at least until I see the courses, the routes for the Giro and the Tour, and then go from there," he said at the World Championships in Yorkshire.

"I’m definitely not going to make a call until at least the December training camp."

Gutted not to be at #SPOTY tonight, but making up for it with a lap of Mallorca with the boys today. All in the bank for next year! Good luck to all the nominees but particularly @AlunWynJones. O and Cioni said ‘no chance you’ll go under nine hours’ 🙄💪💪 pic.twitter.com/iJxPzupER1December 15, 2019

Counting down the days... ⏰We're preparing for 2020 at our Mallorca camp as we look forward to our first full season as Team INEOS 👊 pic.twitter.com/eRrXqRNzrdDecember 13, 2019