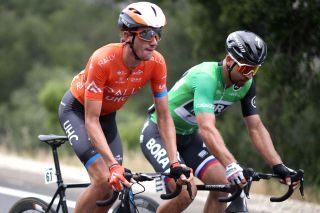 Brandon McNulty is set to get his first taste of Grand Tour racing at the 2020 Vuelta a España, as he prepares for life in the WorldTour with UAE Team Emirates.

McNulty, who delayed a possible jump to the sport’s top tier in 2019 in favour of spending another year at Rally UHC Cycling, has been in Benidorm, Spain, for the past week, preparing for 2020 at the team’s main pre-season training camp.

As well as bike fitting and various other tests, races schedule have been drawn up, and McNulty will make his UAE debut at the Vuelta a San Juan in Argentina at the end of January. After that, he’ll do the Ruta del Sol in February, before riding his first WorldTour race for the team at Paris-Nice.

The rest of the year is still to be defined, but the plan is for McNulty to head to the Vuelta a España in August. Earlier this year, McNulty said it’d be unlikely he’d do a Grand Tour in his first season but the team are keen to give him the experience early on.

“At this point at least, I’ll be going to the Vuelta – at least the start,” McNulty told Cyclingnews in Benidorm.

“Here, they’re super low pressure on me for it. They just said 'if you want to do one week, do one week. If you want to finish it, you can finish'. It’s just to get the experience for now. It’s a nice situation.”

McNulty, whose patience is evidenced by the decision to hold out on the WorldTour contract, is keen to treat 2020 as a whole as a learning experience, even if young riders seem to making their mark faster than ever.

“It’s just about adapting to the WorldTour, I’d say. There’s no pressure on me for results,” he said.

“Obviously, I’d like to get results but it’s not the end of the world for myself or the team. It’s at least a three-year progression – that’s the length of my contract – so next year is about bedding in and learning.”

As for first impressions, McNulty has been pleasantly surprised by the experience in Spain. What has helped is the number of his contemporaries here, with the team having invested heavily in youth over the past two years.

“I really like it here. It’s a great team, I think. I figured this camp would be a really hard focus, but it’s relaxed. It’s serious in a professional way but it’s also a good environment,” he said.

“There are all of us young riders who have known each other since we were like 16 or 17, so we have a nice group there. Overall, it’s a great atmosphere.”