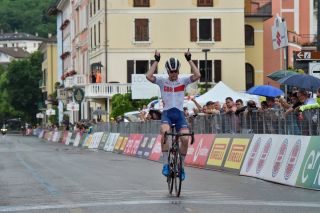 It's all change at Bahrain-Merida for 2020. There's a new name and co-sponsor – Bahrain-McLaren, a bright new red and orange kit, and a host of new riders for the 2020 season.

Fred Wright is among them. The 20-year-old Briton won a stage apiece at the Tour de L'Avenir and Giro d'Italia U23 in 2019, and also excelled on the track, becoming national and Under 23 European Madison champion.

After a spell with CCC Team as a stagiaire at the end of 2019, Wright has turned professional with Bahrain-McLaren, joining three other Briton, including Mark Cavendish, at the team. He's tentatively penned in to start his season at the new Tour of Saudi Arabia in early February.

Fred Wright: I started when I was pretty young. My parents are based down in south London, near Herne Hill velodrome. I was just minutes away from the track, so I used to always go there. That's where I started.

CN: You're going to be teammates with Mark Cavendish, was he an icon for you growing up?

FW: Totally. It's one of those things where you say that I'm joining this team and my friends obviously don't know much about cycling. But then you say it's the same team as Mark Cavendish and they're like 'woah'. It's really cool and it'll be nice to be a part of that.

It'll be good to get to know him a bit. He was here at the orientation camp. It should be good. He's definitely a good person to have in that kind of scenario, telling you what to do. I'll definitely learn a lot next year, that's for sure.

CN: How did you make this step up to Bahrain-McLaren?

FW: I'd say that it was [a big leap last year]. On the road, definitely. I feel like I've gotten a lot stronger, and hopefully it's only going to keep building and I'll keep getting better. The season went better than I thought it was going to go.

That's not to say that I don't think I'm ready; I feel like over the course of quite a short period of time I've thought that actually I'm ready to make this jump and ready to go for it. I can't really put into words how excited I am to get cracking and get racing. I'm really grateful to be given this opportunity, and this camp has got me itching to start racing.

CN: You were a stagiaire at CCC last season. Why did you choose Bahrain-McLaren?

FW: I wouldn't say it was bad at CCC but I think that here, as soon as I spoke to Rod [Ellingworth, Bahrain-McLaren team manager], I thought that with someone like that at the forefront of the team, they'll be bringing those sort of changes that really suit me. what he was saying about the partnership with McLaren, how that was slowly going to make the team even bigger – to join that journey, it definitely feels like the place to be. They've got loads of good ideas.

CN: What kind of rider are you?

FW: I wouldn't say I'm necessarily a sprinter but I'm not slow, just because of all the track I've done in the past. I guess I'm also strong enough for classics-style races. At the moment I'd still say I'm a bit of an all-rounder, who can help do a job in all kinds of races. I think I should be useful for the team. I'd like to help Cav in the lead-out next year – that'd be great.

CN: Is the plan to mix track and road racing going forward?

FW: It seems like the team are happy for me to jump on the track and use it as a training tool for racing, which is perfect really. It means I get to do what I love doing so it's great. I think we'll see how it plays out, but to be honest, I like racing my track bike and racing the Madison. So, to be honest, I'll happy if I can do some six days every now and then. I think I'm in a really good place to continue enjoying riding my bike.

CN: Finally, what are your career goals?

FW: Dreams-wise, I think that in recent times there haven't been many British riders doing well in the classic-style races, and I'd like to come in and try and do that. As a target for the next however many years, I think that'd be really good. It'll more likely be the flatter ones, the cobbles. I think that'd be a good thing to go for.