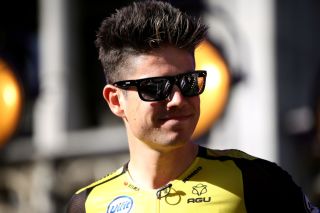 Wout van Aert has told Cyclingnews that he has unfinished business with the Tour de France after being confirmed in the Jumbo-Visma squad for the 2020 race. Van Aert was announced as part of the team’s Tour de France squad at a presentation in Amsterdam on Friday, alongside Primoz Roglic and new signing Tom Dumoulin. Jumbo-Visma made the rare decision to announce their full Tour team in an attempt to give clear objectives to their riders for the first half of next season and even though Van Aert is still recovering from a horrific crash that took him out of this year's Tour he has made the eight-rider roster for 2020.

Speaking to Cyclingnews exclusively at the team’s training camp in Spain earlier this week, Van Aert said: “It’s not revenge but it’s unfinished business with the Tour de France.”

Van Aert crashed near the end of the individual time trial in this year’s Tour and was forced to undergo two major surgeries on his injured right leg as a result. He spent five months off the bike and has only recently been cleared to train. He will undergo another medical check-up on December 23 to determine if he can race cyclo-cross later this month, but the Tour de France in 2020 is a major objective for him and Jumbo-Visma. The squad will head into the Tour with Dumoulin, Primoz Roglic and Steven Kruijswijk all handed leadership roles.

“It's a big aim, especially with Tom Dumoulin coming to the team, Steven having his first podium and Primoz winning the Vuelta. It’s incredible to be part of this team and what makes me happy is that the guys want me to part of it after what they saw I was capable of doing this year. It’s one of the big goals for next season,” Van Aert told Cyclingnews.

The 2019 Tour was a rollercoaster of emotions for the 25-year-old. He was part of the squad that won the team time trial on stage 2 and then went on to win a sprint stage into Albi on stage 10. His crash on 13 brought into perspective just how fickle and dangerous the sport can be but over time Van Aert has come to terms with how his year panned out. Despite the setbacks, Van Aert looks on the positive of his Tour de France experience and highlights the team time trial as a major achievement in his career.

“The Tour came with the success but the whole day of the TTT was one of the most special and the best experiences I’ve had in my cycling career. I came from an individual sport but this was my first TTT on this level and I didn’t know it would feel like that. It was a real team effort with the riders and the staff. That feeling, and the fact that I took the white jersey in Belgium, was just too good to be true.”

There were times, however, during his lengthy rehabilitation in which Van Aert had major doubts as to whether he could or would return to the top of the sport. His two surgeries left him in hospital for weeks, while the resulting rehabilitation comprised of daily routines. He effectively had to learn how to walk again, first with crutches and then unaided and during those weeks Van Aert admits that he struggled to see the light.

“The first ten days I was in the hospital and then it was a relief to be home. At that point, it was okay because every day I could see that things were getting a bit better. The first day I couldn’t do anything but the next day I could sit up in my bed. But then after four weeks I was on crutches and able to do some things around the house and then for the next three weeks, there wasn’t much change. I wasn’t able to walk for more than one kilometer and I was having the biggest doubts. There were no improvements and I really doubted whether I would walk again properly.

"It was a good feeling when I started on the rehab and then within two weeks I no longer needed the crutches. My coordination came back and it became easier. This camp is the first time I’ve been able to do more hours on the bike than in physio. I’m now just working on the last few percent but I’m not there yet.”

Van Aert arrived in Girona a few days before the rest of the Jumbo-Visma team to train for an extended period and ride himself into the routine of daily outings on the bike. So far he has measured up well against his teammates but he admits that there are still areas that he needs to work on ahead of a full competitive return – both in cyclo-cross and on the road.

“In all-out sprints it’s a bit different still. Sometimes I don’t dare to use my right leg totally. I feel a bit scared to push on it but in running and the impacts I need for cyclo-cross I’m still working. If I’m running on stairs I still feel sore the next day and it’s those things that I’m still working on. I can do ten stairs for example but it’s the 11th one that’s the problem. That’s the last bit we need to work on and I don’t want to finish rehab as a good cyclist again, I want to be a complete human. I don’t want to finish my career and still not be able to do more than a one-kilometer run - which is still the case now.”