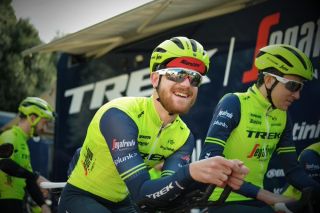 Quinn Simmons steps up from the Junior ranks to WorldTour for 2020 (Image credit: Trek-Segafredo)

The Trek-Segafredo men's and women's team are in Sicily for a winter training camp, combining blocks of hours in the saddle with massage, bike fitting sessions, base testing planning and preparation for the rapidly approaching 2020 season.

Trek-Segafredo's men's and women's team are run on a shared structure of staff and resources and so there are over 100 riders and staff present at the I Monasteri golf resort a few kilometre inland from Siracusa on the west coast of Sicily. The only riders absent where those enjoying the winter in Australia or the USA, including Richie Porte, Koen de Kort, Kiel Reinan, Toms Skuijns, Tayler Wiles, Ruth Winder and Lauretta Hanson.

New signing Lucinda Brand was also given a pass so she can focus on her cyclo-cross racing but neo-pros such as Elynor Backstedt, Charlie Quarterman and Junior men's world champion Quinn Simmons of the USA were all present as they began a fast track welcome to how Trek-Segafredo works.

Mads Pedersen's world champion's rainbow jersey stood out in the outdoor bike area amongst the fluorescent training kits and the new blue ands white racing colours of Bauke Mollema, Jasper Stuyven and Giulio Ciccone. Due to UCI rules, new signings for 2020 such as Vincenzo Nibali and his brother Antonio, Kenny Elissonde and others were obliged to wear their 2019 colours. However it was clear the team is already coming together ready for 2020.

Having the two teams together created a hive of activity throughout the golf resort but the combination of the men's and women's teams appeared to create a more relaxed and open atmosphere, with the riders and staff spending time together and having some fun between the hard work.

Riders gathered in Sicily at the start of the week, with the opening three days focused on media, sponsor and other non-riding activities, with photo shoots going at the same time as interviews, sponsor presentations, testing, and some training on the roads in the quiet Sicilian countryside.

The camps lasts until December 20, giving time for several blocks of serious training, with especially the Classics contenders and riders starting their 2020 seasons early on in Australia having a more focused and intense workload.

Click or swipe to look through the photo gallery.