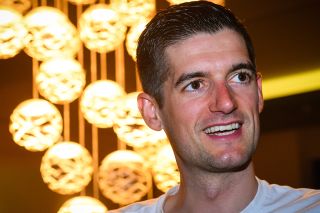 The start of the 2020 Tour de France, in the southern resort city of Nice, may still lie over six months away, but two men at this week's Bahrain McLaren training camp had their minds firmly focussed on next summer's race.

Mikel Landa and Wout Poels, both major new additions to the overhauled squad, are building their 2020 campaigns around the race. The pair, reunited after racing together at Team Sky in 2016 and 2017, join Bahrain from teams where their chances of personal success have taken a back seat to others – whether that was by design or accident.

For the Basque, next season is a chance to prove that he can get the job done on his own after six years of sharing Grand Tour leadership at Astana, Team Sky and Movistar.

"It was an attraction," Landa told Cyclingnews of his move to Bahrain McLaren at the team's training camp in Hvar, Croatia. "They are riding to win and also have one leader for a Grand Tour. That's very important, to feel that support. The riders helping me will have clear ideas, so everything helps."

For the past two seasons, Landa has formed one prong of the infamous, sometimes dysfunctional Movistar triumvirate alongside Nairo Quintana and Alejandro Valverde, also taking a backseat to Richard Carapaz at last years' Giro d'Italia.

The move to Bahrain McLaren is the first time in his nine-year career that he'll shoulder the leadership load entirely, but the task doesn't faze him.

"I think that the team has very clear ideas. They want to race for wins and they are trying to win the Tour de France with me as the leader. All the team are supporting me, and that's very important."

Landa finished fourth at the Giro d'Italia and sixth at the Tour de France last year, with both races seeing him fight back from an early deficit. In Italy, he lost time in both early time trials and started the major mountains minutes down on other contenders. Then at the Tour, he lost two minutes in a crash on stage 10, and was later affected by some questionable team tactics.

"The Tour has a very appropriate course for me this year. There are a lot of climbs and very few time trials. It's a very good opportunity."

If Landa is feeling confident about his chances in France this summer, then so too is Poels, who will target the race with an altogether different objective – both to what become accustomed to at Team Ineos as well as divergent from his new teammate.

For the past five years at the British team, Poels has spent his Grand Tours at the service of Chris Froome, Geraint Thomas and Egan Bernal. The results have been phenomenal, with Poels helping the team to six wins along the way, but now he's looking for his own opportunities.

"I was a little bit stuck in the Grand Tours," he says. "I never won a stage in the Tour, Giro or Vuelta. At this team I can get an opportunity. With Ineos I could do my own thing in other races, but here I'll get a little bit more freedom. So it's a really nice chance. Sometimes you have to go for that."

Poels did get his own opportunities at Ineos – most notably when he took victory at Liège-Bastogne-Liège in 2016. Last year he impressed too, finishing on the podium at the Tour Down Under and Volta ao Algarve, as well as taking a stage win en route to fourth overall at the Critérium du Dauphiné.

So there were plenty of races for the 32-year-old to show himself in 2019, but the big itch is yet to be scratched.

"Normally, yes. That's the plan," Poels said when asked whether he'll ride for himself all year. The big goal is to taste victory at a Grand Tour – the closest he's come in the past have been three second places on various Vuelta stages.

"For sure, especially in the Tour. That would be amazing, to win a stage over there. This year straight away it'll be really hard racing, so we'll see what we can do.

"I thought about the Giro and Vuelta, but the team really wanted me in the Tour, so yes, I signed for three years and maybe next year I can do the Giro. I hope my best years start now – I was racing at a high level last year and I don't see why I couldn't do it again this year and next. I'm full of confidence."

So, it's a whole new start for Landa and Poels then, and renewed optimism ahead of a season based around the biggest race of the lot. Next July we'll see 'free Landa' and a 'free Poels' too.