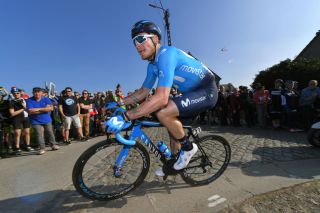 One signing that went under the radar during the winter was Jasha Sutterlin's switch from Movistar to Team Sunweb. After six years on the Spanish team, the German was looking for a new challenge, and Sunweb beat off strong opposition from several WorldTour teams to secure the services of the 27-year-old domestique.

To understand Sutterlin's value as a rider it's important not to look at merely his modest individual results but to speak first hand to those he has worked for, and those who he trains with when at home in Germany. They will tell you of a dependable rider with a huge engine, and of an athlete capable of riding on the front in both the Spring Classics and the Grand Tours.

At the recent Sunweb team presentation in Amsterdam, the German was presented alongside his new teammates and was excited to start the next chapter of his professional cycling career.

"It's something special. I was in a routine and in the same place with Movistar but this feels good. I came here because I was out of contract and started to look at other teams and the opportunities. In the end I decided on Sunweb because I will have a great race programme and it will suit me," Sutterlin told Cyclingnews.

At Sunweb Sutterlin will enjoy an enhanced role in the Spring Classics. He will have more opportunities for himself but also work for Michael Matthews when those duties are required. The freedom to grow in a team better equipped for the Classics was a big draw for Sutterlin when it came to signing for the next two years.

"I wanted to focus on the Classics and then do one Grand Tour to help someone like Wilco Kelderman. Then in the second part of the season maybe I can look at some one-week races. For the Classics, I love the cobbles. There are two options – you either love it or you hate it and I love it. At Movistar I was by myself and there wasn't really a team to help in the Classics but I tried my best. That wasn't what I wanted but we still had Daniele Bennati and Imanol Evriti. In the end, the team wasn't that close in the races because everyone was looking for position but I still learned a lot by myself."

"The main goals will be Flanders, Roubaix, E3 and all the cobbles classics. And then with the Ardennes I'm not sure. In Flanders we'll work for Matthews because he was sixth this year. I missed that group by just one climb, because otherwise, I could have done a top ten but we have a lot of opportunities in the Classics."

The departure of Tom Dumoulin, who leaves Sunweb just as Sutterlin arrives, was not a factor in the German's decision when it came to joining.

"Not having Dumoulin doesn't make a massive difference for me. We have other plans and we have Wilco and then riders for the future. If Wilco is in a good position then I'll give everything for him."

At any rate, Sutterlin hopes to hit the ground running when he makes his Sunweb debut next season.

"When I went to Movistar I knew no Spanish. It was a big shock but it didn't take a long time to get into it. I enjoyed those six years but I think it was time for a change."