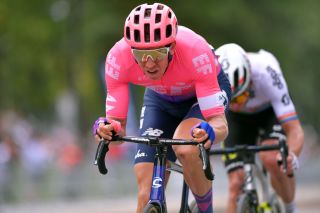 Sep Vanmarcke believes that the EF Education First’s 2020 Classics team is one of the strongest that he has been part of and that they are more cohesive than the 2011 Slipstream team that included Thor Hushovd, Heinrich Haussler and a host of other one-day specialists.

Vanmarcke was just a neo-pro when Garmin and Cervelo merged ahead of the 2011 season, and the coupling of teams created what many expected would be a hugely successful one-day unit. However, individual ambitions and a lack of cohesion were often issues, and it wasn’t until Paris-Roubaix and Johan Vansummeren’s shock win that the team finally came through.

The 2020 version of Slipstream Sports holds the Tour of Flanders winner Alberto Bettiol but it is also stacked with proven talent, with Vanmarcke and Sebastian Langeveld forming part of a strong core. The team has also strengthened by signing the experienced Jens Keukeleire from Lotto Soudal.

"In theory, in 2011 we had huge names, and that was incredible but, apart from the win for Vansummeren in Roubaix, it didn’t work out," Vanmarcke told Cyclingnews at EF Education First’s December training camp.

"Except for Roubaix, it was a bad Classics season. Hushovd, Farrar, Haussler, Hammond, they were all big names. In names, it was a better team but we have a great team now with Sebastian, Alberto, Jens and me."

Vanmarcke left inconsolable after taking another fourth place at Roubaix

Vanmarcke believes that the nucleus of the Classics team in 2020 will put the ambitions of the collective ahead of individualism and that their strength in depth will be a key feature in the first part of the new campaign.

"In theory, we have four guys for the finales and we’re armed for those races. We can go to the finale with cards to play, like many teams try to do. I think this is a stronger cohesion of riders. In 2011 we had a lot of big names but they all wanted something for themselves. Here we can work well together. We’ll have a really strong team."

On a personal level, Vanmarcke still holds ambitions of winning a Monument. He has been close at several points during his career and the 2019 campaign summed up his time in the sport in neat microcosm. He came into the Classics with high form but suffered a crash in E3 Harelbeke that threatened to ruin his spring.

From there, he battled through the pain and, despite missing over a week of training, he was in contention to win Paris-Roubaix until a mechanical and a busted radio saw him eliminated from the leading group. That he still salvaged fourth on the Roubaix velodrome was a testament to his perseverance and talent but it once more illustrated how cruel the Classics can be if you fall just short.

"Overall, I had a really good level all season. I won early in the season and I was really ready for the Classics. I was still fourth in Roubaix, and I won Plouay, so these things were really positive but, of course, I had some disappointments," Vanmarcke told Cyclingnews.

"The crash in Harelbeke really ruined my Classics. I could have got a lot better than fourth in Roubaix and I could have had a shot in the other races. I was, of course, disappointed not to be selected for the Worlds, especially when you see how it went. It would have been a good course for me.

"That crash, though, was like seeing five months of work go into the garbage. I showed in Flanders that, despite not training for nine days, I could still do a job for the team. I was really happy that Alberto won after a great team effort but I was disappointed with Roubaix and the radio problems that cost me the chance of winning.

"I learned a lot from that period, though. I learned that if things go wrong or if your training is disrupted, it’s not all lost. Sometimes things can go wrong but if you stay calm and do the right thing then you’ll still be able to do something. Because of the crash, I had so little pressure. We didn’t even know if I would finish Flanders. The doctor thought that I might only do three or four hours. Once I passed that period it was a mental boost. There were no expectations on me and that was nice. That might be the only time that happens in the Classics."

The Belgian’s 2020 race programme remains virtually unchanged and he will kick-start his season at the Tour de la Provence in February before camping up his training with time spent at altitude.

The Opening Weekend will be his first major appointment of the Classics season before a complete run through the Belgian one-day races. If he can remain fit and healthy, then the 31-year-old will once again be a factor in a number of races.

"I’m still motivated. I’ve always been close to winning and I’ve always been competing against the best guys. It’s just that in the sprint I’ve not had it or I’ve had some bad luck but I’ve always felt confident that I can compete, and so one day when everything goes perfect I still think that I can win a race like that," he said.

"I still think that’s possible. If I’d had more luck, made the right choice, or flicked someone one or two times then I could have already won a Monument. That’s why I continue and still believe."