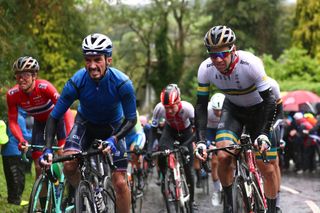 When Team Sunweb were left unable to fill the void created by Tom Dumoulin's departure, it quickly became apparent that the team would need the rest of their roster to step up and perform in 2020.

While the squad's management will be expecting a collective effort, Michael Matthews is aware that most of the expectancy will be placed firmly on his shoulders. After Dumoulin, Matthews was always considered the team's next world-class performer, and while new recruit Tiesj Benoot will be afforded a certain amount of time and space, Matthews knows that he must hit the ground running next season.

However, speaking at the unveiling of the team's 2020 kit in Amsterdam on Tuesday, Matthews also told Cyclingnews that his responsibilities will run far deeper than just notching up wins.

"I've been working on it personally, to try to figure out how to be that person, and be the guy my teammates can come to. I think it's going quite well," he tells Cyclingnews as a huddle of journalists gather around him.

Matthews has plenty to fall back on when it comes to nurturing a role as a team leader. The Australian has played cameo roles for a variety of blockbuster stars since his debut on the WorldTour, and the styles of Oscar Freire at Rabobank, Simon Gerrans at Orica, and Dumoulin all offered something different. Some of those relationships worked – one didn’t – but the experiences were invaluable all the same, and while it's still early days for Matthews, he is at least finding his voice as he recognises the need to stand up and deliver.

"I'm quite a quiet guy, so to be a real leader or captain you need to be outspoken, and say in meetings what you need and what others are required to do in order to get the best out of them," he says.

"In the last few years, I was too quiet and held things inside, but I have a lot of experience now. I wouldn't do it in a negative way, and I'm not the sort of person to stand on a rock and tell everyone to follow my orders, but we all have to work together. I'm also not someone who knows everything, either, and so I'm always learning and gaining more experience. I can share what I've learned and, hopefully, that can help."

While shouldering pressure and media attention are two aspects of a strong leader, the greatest way in which Matthews can spread confidence throughout Sunweb is by winning races. By his own admission, 2019 was a disappointing season, but despite the hard knocks, the 29-year-old still picked up two WorldTour wins – one of which saw him defend his Grand Prix Cycliste de Québec title in scintillating style.

"Winning races, that's a good starting point. For sure, you need your team to be able to do that, and the way the team has gelled together after a difficult 2019, it's a really good starting point for 2020. It's nice to see all the smiling faces," Matthews adds.

A greater focus on the Classics

In the past few months, Sunweb have made modest noises about their stage-racing core, but on Tuesday the team pushed their sprinting and one-day pedigree by way of compensation. They hold a talented but relatively inexperienced sprint arsenal, but Matthews believes that the setbacks and the necessity to mature as a unit in 2019 will help them next year.

The loss of Tom Dumoulin on the eve of last year's Tour de France left Sunweb short of their main focal point, and cast the spotlight firmly on Matthews and the rest of the team. They failed to win a stage, and there were certainly hiccups along the way, but Matthews saw enough from the team to suggest a bruising Tour campaign would help them in the long-term.

"Unfortunately we lost Tom quite early in 2019, but that meant that we've already been thinking about how we can get the best out of each other for next year. We've already started making steps in the right direction.

"It was difficult [at the Tour - ed.] but every day we kept trying and we kept fighting. The results were there but they weren't what we wanted," he says.

"In the end, I needed to be the core of the team that keeps everyone going so that we're pushing our limits, so I had to stay strong mentally. It was hard at the Tour, but I think that we did a pretty good job considering all the things we had to jump across during the race."

Playing catch up and a Canadian springboard

The win in Canada – Matthews' third WorldTour win there in four races – was a welcome return to the podium for the former Tour de France green jersey, and provided some much-needed momentum ahead of the winter.

"That was a nice win. That was a bit of a saviour for the year, but I love those Canadian races, and the circuits really suit me. It was something that I worked really hard for, and it was important to show what I could do, even late on in the season."

Quebec and a stage in Catalunya aside, the 2019 campaign fell below Matthews' own expectations. He crashed out of Paris-Nice on stage 1, and the resulting injuries left him limping into the Classics. A solid 12th at Milan-San Remo papered over the cracks, but by the time the cobbles came around, he was struggling. He still picked up sixth at the Tour of Flanders, but he disappointed in the Ardennes before a string of near-misses littered his summer.

"It was another difficult season after my crash at Paris-Nice. I was basically chasing my tail the entire year. My form was the best I'd ever seen it going into the new season, so it was hard to take. This winter, I've taken five weeks off the bike and really just got back to enjoying life, and doing the things that make me happy. I just wasn't my happy self this year. I've now had the time to refocus and get my smiling face back on," he tells Cyclingnews.

"After the crash, I just couldn't get the numbers that I was getting during the winter. I was still recovering from the crash, both mentally and physically, all the way up to the Tour de France. It was so frustrating.

"I learned that when you have a bad crash like that, I need to take the time to recover. You can only do more damage by continuing to race. At Milan San-Remo, I was back and racing just two weeks after the crash and, fortunately, I had good results, considering the crash that I'd had, but that made me think that I was recovering quicker than expected. But coming back to racing so soon was just silly," he says.

"The team was actually telling me not to, but it was my call. I thought that I was ready, but I wasn't. I convinced myself that I was fine, but looking back I should have forgotten about the Classics and found some other goals. It's hard to tell a Classics guy to do that, though."

Contrary to current speculation, Matthews will forgo the Tour Down Under in 2020 and instead kick-start his season at the Opening Weekend in Belgium. The rest of his programme has yet to be finalised, but will be ironed out at the next Sunweb camp in Calpe over the next few days. The Classics and then the Tour de France are likely to form the nucleus of his season.

"I'm planning to not have any bad luck. Seriously, though, I've done a lot of testing and recon. I've tried to make sure that everything is right and I've been doing specific training for the parts of races where I've had flaws," he says when asked about how he can make the next step in the one-day spring Classics.

Whether Matthews can bring his one-day success rate in Canada to the European stage in 2020 remains to be seen. However, with the departure of Dumoulin, the Sunweb team is crying out for a rider to step up and lead them. It could be Benoot, or it could be one of the blossoming sprinters, but if there was ever a time for Matthews to seize the moment, this is it. He has the weapons at his disposal and the team willing to back him – he just needs to put all of that together and the wins should come.

Dealing with that additional pressure and leadership could end up being the true making of the Australian, but he is wise to remember that overthinking and extended analysis can quickly tie a rider in knots.

"What's been missing is me enjoying racing," he says, finally.

"If I can bring that back and just race as I used to... The goal is to just enjoy racing and not be so stressed. I want to get back to having fun and that will lead to results.

"I was looking back at 2017 when we had an amazing year with the team. For me, I need to backpedal and see what I did then. That worked, and we tried to change a lot of things in 2018 and 2019, but we know what worked. We have a beautiful team and things don't last forever, so we've got to enjoy it."