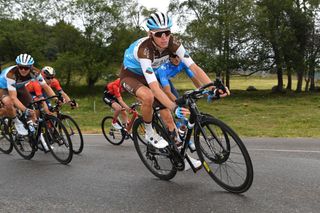 Romain Bardet will skip the Tour de France in 2020 and instead ride the Giro d’Italia and Vuelta a España, while also targeting one-day titles at the Olympic Games and World Championships.

The Frenchman, who finished on the podium of the Tour in 2016 and 2017, announced his plans to the press on Wednesday morning during an AG2R La Mondiale training camp in the French Alps.

"It's not a decision I've taken lightly," Bardet said, "but it's time to do something different."

Bardet has ridden every edition of the Tour since his debut in 2013, his only other Grand Tour appearance coming at the Vuelta in 2017. He has spoken of his desire to ride the Giro in the past but, as the French star of a French team, it hasn't been easy to break out of a programme that revolves around July.

However, after finishing a subdued sixth overall in 2018, Bardet had a poor Tour this year, finishing 15th after cracking on the stage to the Col du Tourmalet. The final stage of the Tour would be his final race of the season, and he spoke of a need to shake things up as he headed for the off-season.

After riding his track and cyclo-cross bikes this winter, Bardet came to his decision, which he described as a 'leap into the unknown'.

Bardet insisted he wasn't in the slightest put off by Giro's three time trials, which have been his major achilles heel over the years.

"It's a route which entices me enormously. There are long stages with huge elevation gain, especially in the final week. It's true, there are three time trials, but there was a lot of time trialling this year and a climber won. I want to profit from a race that's often less open than the Tour, and express myself."

After starting his season at the Tour Down Under in January, Bardet will race in February in France before riding an Italian-flavoured spring ahead of the Giro in May. He will take a break before building up to the Olympic Games, which take place on a hilly Tokyo course on July 25, less than a week after the end of the Tour.

Another stage race will precede the Vuelta in August and September, which will itself act as a springboard to the similarly hilly Road World Championships in Switzerland in late September.

"It came from a desire to do a totally new programme. I'm very keen to discover the Giro, and don't want to regret not doing so sooner. It's time to gain a perspective of other Grand Tours, and 2020 is the perfect year to do it," Bardet said.

"You know my love for one-day races, and the Tour de France would be tricky in that respect. This way, I have specific blocks of training leading into each of my main objectives, which will allow me to be at my best for all of them."

Bardet also pointed out that his absence from the Tour will allow other riders to come through and play more of a role, notably Pierre Latour, who will lead the line for AG2R La Mondiale in July.

"There's a young generation, with Pierre in the team, and this gives them a chance to express themselves. It's a very good thing for the group as a whole. 2020 is the perfect time to do this, from all perspectives."

Sitting to the right of his star rider, AG2R La Mondiale boss Vincent Lavenu insisted Bardet had the full support of the team and its sponsors, and said he would send a 'competitive' team to support him at the Giro.

Bardet had been widely expected to go for the Giro, but it was suspected he'd go on to ride the Tour as well, albeit without the pressure to compete for the overall title. The 29-year-old, however, brushed that notion aside.

"The Giro-Tour is difficult in the sense that I don't want to play a minor role at the Tour," he said. "It's true, I could go for stage wins or the polka-dot jersey, but I don't want to go to the Tour aiming for anything other than the title. I either do the best GC possible, or I don't go at all.