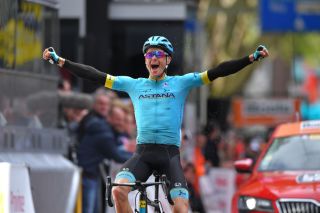 Astana team leader Jakob Fuglsang says that he expects to target the overall classification at the 2020 Giro d'Italia, and may ride the Tour de France in the service of teammate Miguel Angel Lopez, as he works to be at his best for the Tokyo Olympics.

Fuglsang: Movistar was a great option for me

Fuglsang lands victory at Liège-Bastogne-Liège a decade after debut

The 34-year-old had what was arguably his best-ever season in 2019. He won Liège-Bastogne-Liège, the overall title at the Critérium du Dauphiné for the second time, and a stage at the Vuelta a España, although he crashed out of July's Tour de France, having gone into the race as one of the favourites.

"I still want to give going for the general classification at the Tour another go, even though it hasn't gone too well for me there the past couple of years," he told Danish television channel TV 2 Sport on Monday. "But I think trying something new and seeing what I can do at the Giro would be a good idea."

After once again targeting the Ardennes Classics in the spring, Fuglsang also wants to see if he can turn what was a silver medal at the 2016 Rio Olympic road race – behind Belgium's Greg Van Avermaet – into gold on a hilly road-race course in Tokyo that should suit his abilities, and which comes just a week after the finish of the Tour in Paris.

Fuglsang nevertheless expects to be part of Astana's Tour de France squad, but to potentially ride in the service of Lopez, just as he did at the 2019 Vuelta a España, where Lopez finished fifth overall and Fuglsang took what was – somewhat surprisingly – his first Grand Tour stage victory.

"But trying to ride for the overall classification at the Tour and then being fresh enough for the Olympic road race would be difficult," said Fuglsang, who also rode the 2016 Tour in support of then Astana teammate Fabio Aru before going on to take second place in the Olympic road race in Brazil.

"It did work out pretty well last time, so it is a bit of a case of trying to recreate what happened then," he said.