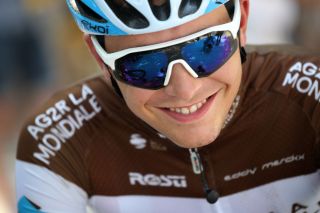 On the results sheet for the 2019 Grand Prix de Montreal, the name Benoît Cosnefroy is preceded by the number 17, but that figure does little to tell the story of the young Frenchman’s race or his career so far.

Cosnefroy attacks on the final lap and leads solo until Julian Alaphilippe claws his way across with 2.7 kilometres to go. The Milan-San Remo winner, however, fails to offer a turn, and Cosnefroy waves his arm in remonstration as he senses the chasing group closing in.

Rather than yield and slot back in for the sprint, he summons the strength for another big acceleration in one final doomed attempt to distance the field. As the likes of Greg Van Avermaet sprint for the line, Cosnefroy pretty much stops pedalling and almost free-wheels his way through the final 100 metres.

Tour Down Under: Cosnefroy pushes through the pain to spend day in break

WorldTour points would ordinarily be a priority – both for a young rider and a team at the lower end of the rankings – but they were far from Cosnefroy’s mind when he launched his first attack, and much less now his chance of victory had disappeared altogether.

“Top 10s in big races are great results, but I prefer to take the risk to try and win than finish fifth having tried nothing,” Cosnefroy tells Cyclingnews as we sit down for an off-season interview.

“When I cross a finish line, I need to have the feeling of having given everything. I’m prepared to take risks to try and win, because I’m not going to be happy to follow my way to fifth. It doesn’t always pay off, but when it does, it really pays.”

After a solid debut professional season in 2018, there have been plenty of jackpots this year for the former U23 world champion. Of his five victories in 2019 – all in first-category French races – the most emphatic and revealing was Paris-Camembert in April.

He was supposed to wait for the finale, with teammate Quentin Jauregui to try something from further out. However, with 70km to go, the restless Cosnefroy told Jauregui he wanted to open up the race, and so he did, bridging over alone to the breakaway duo. With five kilometres to go, they were caught by a select group of 12 riders, including Jauregui, but Cosnefroy still had enough in the tank to track a late attack from Kevin Geniets before surging convincingly clear on the false flat with 800 metres to go.

“I place a lot of importance on enjoying my racing. If I don’t attack, I don’t enjoy it. You’re not actually in cycling for all that long, so if you’re not enjoying it, that’s not okay,” he says.

“For me, the enjoyment comes first, and the performance follows on from that. If I’m not enjoying it, I won’t perform, and I don’t see it working in the long term.”

It says a lot about the modern state of the sport that Cosnefroy almost feels like a throwback. In the era of power meters, training zones, and WorldTour points, riders are generally more calculating than ever, which perhaps explains the enthusiasm that greeted Alaphilippe’s flamboyant display at this year’s Tour de France.

“The scientific side can weigh a bit too heavily on the enjoyment side. You have to have that scientific element – there’s no other choice – but instinct is just as important,” Cosnefroy says.

“In training, I’m a bit more scientific than when I’m racing, but not much more. My sessions are well calibrated but I still don’t pay much attention to my power meter.”

When we note a similarity with Alaphilippe, both in terms of his profile as a rider and his approach to racing, Cosnefroy smiles: “I’m flattered to be mentioned in the same sentence.”

Born into a cycling-mad family in Normandy, on the northern tip of France, he took up racing at the age of 10, around the time the Tour de France first made an impression on him. It was 2006 and Floyd Landis had come back from the dead to win the yellow jersey with a staggering solo ride into Morzine.

“I remember my dad and my grandad saying ‘that’s not normal’," Cosnefroy recalls, and so it proved, as Landis was swiftly stripped of his title after testing positive for testosterone. That didn’t put Cosnefroy off and, rather than the big stars of world cycling, he was inspired by local riders who’d made it to the professional ranks, like Amael Moinard.

The rolling roads of Normandy helped cultivate his penchant for aggressive, out-of-the-saddle efforts, but a top-level career didn’t seem a realistic prospect until much later on.

“I don’t have the same path as everyone – I reached this level quite late,” Cosnefroy says.

“I never performed in the juniors, and never represented the national team on the road – only in cyclo-cross. In the U23s I never had any big victories, until I won Worlds.”

By the time he raised his arms aloft in Bergen two years ago, however, Cosnefroy was already technically a professional, having signed a contract with AG2R La Mondiale that began in August 2017. The French team were well aware he was a diamond in the rough, having nurtured him through their development set-up, Chambery Cyclisme Formation, for the past three years.

The story of how Cosnefroy wound up there was an early indication of the go-getting attitude we’re now seeing on the bike. By his own admission, the 18-year-old Cosnefroy, with no results of note in the juniors, was a relative unknown outside Normandy, but he certainly made an impression when he hitchhiked his way along the nine-hour journey to present his application.

“That shows he has a very strong character,” says Lavenu, who adds that there’s more to Cosnefroy than meets the eye.

“He has this sunny, cheerful disposition, and a child-like air, but behind that facade is someone who know’s exactly what he wants and who isn’t intimidated by anything. So he has the smile of a young child but the determination of someone much more mature.”

Cosnefroy’s start to life at Chambery and the U23s was disrupted by a horrific crash at the 2015 Tour des Pays de Savoie, in which he spent two hours on a hospital operating table after being hit by a car. The following year was more solid but the revelatory year was 2017. Even before the rainbow jersey, won with typical flair, he’d signed his pro contract and won his first pro race at the GP d'Isbergues.

His first pro season in 2018 was solid, finishing with a glimpse of things to come when he made the podium of a memorable Paris-Tours, while 2019 has seen the wins roll in, with Paris-Camembert, GP Plumelec, and La Poly Normande, along with a stage and the overall at the Tour du Limousin. Around those lower-level French races, there has been an increase in WorldTour outings, with Cosnefroy notably called up for his Tour de France debut – an indication of the team’s belief in him.

“For the time being, I’m making a good start. I’m taking steps forward physically and gaining experience all the time,” Cosnefroy says.

“This year, it was really important for me to raise my arms in victory. That was the big objective, and to do it four times, with five victories when you count the GC at Limousin – where I wore a leader’s jersey for the first time – was great for me. The Tour was a great experience. I hoped to perform better but I crashed a week before and then again on the opening stage. In any case, finishing it was an important step, physically, and will allow me to improve as a rider.”

'I want to be one of the best in the world'

Cosnefroy has improved so much in such a short space of time, it begs the question, how far can he go?

“I don’t yet know my limits,” he says – a sentiment that’s echoed by Lavenu.

“He’s moving through the ranks rapidly, and he has the physical and psychological qualities to progress even further,” says the boss. “How far he can go, we still don’t know, but he has a bright future.”

Cosnefroy describes himself as a pure puncheur, with a passion for one-day racing. Going back to the Alaphilippe comparison, he highlights a particular fancy for La Flèche Wallonne, where his compatriot has won twice in a row. This year, he was in fourth place on the famous Mur de Huy until 150 metres to go, at which point he cracked dramatically and faded to 12th. That weekend, he played a prominent role in opening up the race at Liège-Bastogne-Liège.

The Ardennes will be his primary focus in 2019, but he's also set to make his debut at the cobbled Classics in the north of Belgium, something that team leader Oliver Naesen was nagging him to do as early as last year. "He's so strong and can do super good results, I think," Naesen told us recently.

“I want to take the next step now and win an Ardennes Classic, or something in Canada – a big one-day race. I’m setting my sights high and I’m hoping the door will open for me," says Cosnefroy.

"I'm not sure which Classics in Flanders I'll do. They don't suit me as well as the Ardennes but it's pure racing, and that excites me."

When talking about Alaphilippe, who'll also make his cobbled Classics debut next year, Cosnefroy emphasises the fact that we’re talking about the number one rider in the world. Emulating him, it seems, goes beyond riding style. Much like his approach to racing, why aim for anything other than the top?

“I’ve maybe had a slower progression than others, but I think I can be among the top riders in the world at some point,” he says. “It’s something that’s very much in the corner of my mind, and I think I’m capable of it.

“I’ll be able to give you a better answer when we talk about it in five years time but, in any case, I’ll go for it 100 per cent.”

From Benoît Cosnefroy, you can expect nothing less.