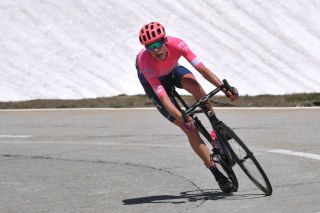 Hugh Carthy will return to the Giro d’Italia in May as he looks to improve on his 11th place overall in 2019. The EF Education First rider had a breakthrough year last season with his consistency at the Giro leading to a sensational solo stage win at the Tour de Suisse a month later.

Carthy, 25, mulled over the idea of racing the Tour de France in 2020 but with his desire to make incremental steps before reaching the peak years of his career the talented climber opted for the Giro instead. A top ten overall placing is the initial ambition but with EF Education First looking to back the young rider, a top-five ride isn’t out of the question.

"I want to have a crack at the Giro. I want to go back. I've learned from what I did last year and wanted to put that into practice this time around," Carthy told Cyclingnews at his team's training camp in December.

"I'm on the right track and physically I'm in a good place now. I've learned how to tweak things like my diet and I'm in a position where I can focus on a race and have my best go at it. In general, the Giro is a race that suits me. In this day and age it's still a race that suits attacking, and with the high mountains the breaks can stay away. You can be quite strategic and it's a race that suits my ambitions."

EF Education first have yet to announce a Giro d'Italia long list but Carthy will make his season debut at the Tour de la Provence before racing in Catalunya. His final warm-up race before the Giro d'Italia will come at the Tour de Romandie in April but his ambitions are based on making sure that he peaks for his May objective.

After learning his trade at Caja Rural and now Slipstream, this will be his first truly concentrated effort on racing the general classification at a Grand Tour.

"I think that top ten would be nice. You never know though because you can have a crash in the first week and lose a few minutes but then things can happen to others and then all of sudden a top-five could be in your grasp. If I have good luck and good health then a top ten is realistic," Carthy said.

"The Tour was an option, but at this stage in my career I wanted to focus on the Giro. The team will support me and they're happy with my decision. Over the next few months we'll build a plan together so that I can arrive at the Giro in the best possible shape.

"At the moment I might be the GC guy at the race but there might also be someone else who does it. I don't know the exact team yet. I'll be one of the leaders though."

Carthy re-signed with EF Education First during the second half of 2019 with a two-year contract extension his reward for a key season in his development.

Carthy would have attracted attention from rival teams but he was clear on his intention to stay inside the home that has helped his development since his step up from the Pro Continental ranks.

"I feel that it's working and so do the team. I don't want to waste years of my career readjusting to teams when I feel like it's working now. I felt that it was the right time to extend my contract and I was happy to stay. I want to stay ambitious and keep making positive adjustments."

While Carthy remains determined and ambitious to fulfill his potential he is also well-rounded enough to know that instant success is not always possible. In 2018 during a stage of the Tour de Suisse, Carthy went on the attack late on during a key mountain stage only for Mikel Landa and then the chasing peloton to hunt him down in the closing moments.

Twelve months on, Carthy developed enough as a professional and as a person to put episodes like the 2018 Tour de Suisse into context and use that experience in order to improve.

"People develop and mature at different rates. For me it's come a bit later. Nowadays some riders just burst onto the scene at 20, 21 but it was never going to be like that for me.

"The team knew that and they allowed me to be patient but behind the scenes every winter I was feeling better. I felt like I was always making steps forward but the time and place hadn't always been there for that to come out. There was no stress and we were all confident. I just had to be patient."