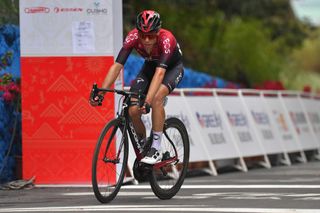 When David de la Cruz signed for Team Ineos two years ago, he did so believing it would be the perfect place to develop as a Grand Tour rider. His two-year contract five days from expiry, he still feels that potential is unexplored, and hopes to find more resources at his disposal with UAE Team Emirates in 2020.

De la Cruz, who joined the British team from QuickStep, won stages at Ruta del Sol and Paris-Nice – where he also finished 10th overall – in 2018, as well as finishing 15th at the Vuelta a España.

However, the 2019 campaign hasn’t been so fruitful, with a string of injuries and only a controversial late inclusion in the Vuelta squad.

“Team Sky was a good experience. I was able to learn from riders like [Chris] Froome, [Geraint] Thomas, and [Michal] Kwiatkowski, and that will serve me well for the coming years,” De la Cruz told Cyclingnews at a recent UAE team training camp.

“But I didn’t find the space I’d hoped to. You’re conscious that there are a lot of riders who have the same profile, and they’re all very very good, so it’s difficult to find the space. When you go to a team with that much competition, it’s hard to find your place, and that’s the main reason I didn’t perform as I wanted to. You have competition from within your own team, and then it’s hard to get selected for races, so you don’t do any races, or you don’t do the ones you want, or the ones you go to you’re not 100 per cent fit. It complicates things."

De la Cruz will pull on the white jersey of UAE Team Emirates in the new year, taking pride in once again riding for ‘one of the very top teams in world cycling’, after QuickStep and Ineos.

He was persuaded to join by a conversation with team manager Joxean ‘Matxin’ Fernandez, who used to work at QuickStep.

“I have a good relationship with him and he showed his belief in my abilities. That was important,” De la Cruz said.

“When someone calls you after a rough year and puts his faith in you… that’s motivating. I want to train hard and go out and get good results, not only for myself but for the guy who believed in me.”

De la Cruz, who finished seventh at the 2016 Vuelta, is keen to focus on Grand Tours at UAE. The team have Tadej Pogacar, who finished third at this year’s Vuelta, and Fabio Aru, who won the Spanish race in 2015, along with a number of young talents, but De la Cruz should find more opportunities than he did at Ineos.

In 2020 he will ride the Giro d’Italia and Vuelta a España, and will share leadership at the Giro with Davide Formolo.

“In principal, my objective is to see where I can be in the Grand Tours, and also week-long races like Basque Country and Catalunya. I will have the tools to try and develop fully and I want to see where I can end up, when I have the faith of the team.

“If everything goes well, and I have a team that supports me and gives me all those tools, I feel capable [of bigger things in the Grand Tours]. That’s what motivates me about this team – to see how far I can really go. If, in the end, it doesn’t happen, I’ll know it’s because of my own limitations, and not because I’m in a team that hasn’t put everything in place for me.”