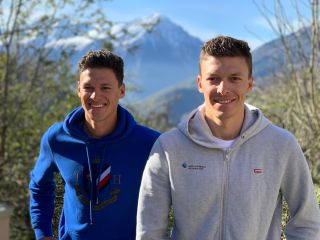 The 2020 season will see another band of brothers in the professional ranks. Following in the footsteps of the Sagans, Nibalis and Quintanas are the Naesens. Oliver has ridden for AG2R La Mondiale since 2017, and will be joined next year by Lawrence, two years his junior.

The pair are very much alike, both sharing the same confident, forthright disposition and sense of humour, as well as similar physical characteristics on the bike. Even their paths to this point are similar, both being relatively late risers in turning pro at the age of 25.

Oliver, now 29, dropped out of university and worked as a delivery driver before an upsurge in results led him to the pro ranks with Topsport in 2015, then to the WorldTour with IAM in 2016. Since joining AG2R in 2017, he has established himself as one of the world's best Classics riders.

Lawrence Naesen to join brother Oliver at AG2R in 2020

Lawrence only picked up cycling while he was at university, and spent two years at the same amateur team as his brother before turning pro with Wallonie-Bruxelles in 2017 and spending the past two years in the WorldTour with Lotto Soudal.

Cyclingnews sat down with the pair at AG2R's recent pre-season get-together in the French Alps to discuss their relationship and how they plan to use their shared understanding to form a powerful unit next spring.

Cyclingnews: What was it like, growing up in the Naesen household?

Oliver Naesen: We had a normal youth, we fought a lot! We did most of our hobbies together, like skateboarding, BMX and all that. We went to the same schools, had more or less the same friends, even. We’re the sort of brothers who are good friends, but we really have fought a lot.

CN: Who won the fights?

ON: Me – until he was bigger than me, then we didn’t try anymore!

Lawrence Naesen: Actually, it was until I once put him down and spat in his ear! That was the last time.

ON: I hoped you weren’t going to mention that, but okay.

LN: Yeah. I was in university studying to be a teacher, and I had some time after classes and wanted to do something, and I’m kind of sporty, so I saw Oli start to win some races and I thought, 'Huh, my turn to do the same thing'.

ON: He was jealous of the attention…

CN: It wasn’t a cycling family then?

ON: No, our father is a 'sporty' and always cycled but only as much as anyone in Belgium.

LN: There's a cycling group in our town, like a tourist club, and he took us along to that, but that's it.

CN: Did you watch cycling on TV as kids?

LN: I only started watching it in my last years of university. I remember the Contador-Schleck duels. I thought it looked fun.

ON: Sometimes it's simple, eh?

CN: Things progressed quickly for both of you, then?

ON: For him it went really quickly. For me, I wasn't pro at the end of the U23s – I was two years amateur even after – so it went a bit slower. For him, what was it…?

LN: I started as second-last year U23, and in my last year U23 I started to win races. I was also an amateur for two years, then after four years of cycling I was pro. It was pretty fast.

CN: Did you do competitive sport beforehand?

LN: I did athletics, but that was until I was until like 16. In between, nothing special.

ON: There was a small forest behind the house and he made jumps and everything.

LN: I went out with the shovel, took the bike, and whoosh. Good times.

ON: I tried it only once, and I broke a bunch of bones! It was not for me.

CN: Did you ride road bikes together, growing up?

ON: Not so much because I was already pro.

LN: In my first two years I trained alone, just for a couple of hours each day.

ON: He only ever did two hours…

ON: When he finished university we rode more together. He was in a Continental team and I was with Topsport so we did some races together. Then when he turned pro, all the time.

CN: Do you train together now?

ON: Yes, with the same group as Greg [Van Avermaet] and everyone.

CN: So you both live in the same area?

ON: I moved a couple of years ago and now there's 10km between us, but now he's going to live with his girlfriend in the Ardennes.

LN: I'm coming back... I’m building an apartment really close but it's not ready yet.

CN: Lawrence, was it an easy decision? Did you have options elsewhere?

LN: I signed pretty early in the season, actually. I didn't speak with any other teams. I was really happy to be able to come here, because it was like one of my main life goals, to get in a team with my brother.

CN: So the fighting is definitely over then?

LN: Maybe it returns now, eh, if they put us in the same room…

ON: That’s the thing, I really wouldn't want him to be in the team just as my brother – that’s not at all what I want for him. He's a different rider to me. I don't think he'll do the Tour de France or anything, so we’re not going to be together all year, so it's perfect. He can discover himself and discover the team. That's how it should be.

CN: How did you convince him to come?

ON: We really don't have any sprinter-ish guys. If he came to us, it would be smart because he has chances almost everywhere. How many races finish in a bunch sprint? Almost all of them. Here, if you do top-five in a bunch sprint, everyone will be happy. If you do just fifth in Lotto... they have other sprinters who can do that. Sportingly, I think this is the best chance to develop himself, and also for the Classics, we have Nico [Denz] and Bagdo [Gediminas Bagdonas] leaving. It's their spot he's filling, and physically he’s stronger than them, so our Classics team level goes up, which is perfect.

CN: That group has developed nicely since you joined…

ON: Ever year it's better. There might almost be a fight for selection next year.

CN: Where does Lawrence fit into that?

ON: All I ask is you survive as long as you can, and the later you’re working, the more important the work is. Stijn [Vandenbergh], for example, sometimes I don't see him for the first three hours, but then he's there and it’s super important – I don’t have to think, I always have a teammate pulling or chasing. Survive as long as you can and make sure I'm never alone with 25 guys. Be there, be in groups, be strong collectively. That’s what we need to do now. On paper, it's no problem, but on asphalt or cobblestones it hasn't really worked yet. We have a strong team but we have to all be strong at the right moment.

CN: Lawrence: How much does it motivate you to be working for your brother?

LN: It motivates me a lot. It's different to last year when I was working for guys like Tiesj Benoot or Jens Keukeleire. It’s more natural to help Oli get a good result.

ON: Maybe he goes the extra mile.

CN: Communication won’t be a problem...

ON: I don’t think so. It's easy. The races we've been in together, we already spoke a lot. I told him more or less what to do. The same things I tell my teammates, I also tell him. If I know there are going to be echelons somewhere, I tell my teammates, and I tell him, but I don't tell the rest, of course. I tell him 'this is privileged information, just for you'.

LN: And I didn't tell the team – promise!

CN: What was that like – racing against each other?

ON: He did chase me down sometimes, actually.

CN: Lawrence, what are your goals outside the Classics?

LN: My only goal is to win a race – it doesn’t matter what level.

ON: The good thing in our team is you have the entire French programme, with the Coupe de France. The level is quite a bit lower than the WorldTour and it's good for morale not to forget what it’s like to win a race. A lot of WorldTour teams take young riders who won I don't know how many races as U23s or juniors, and it's just a bit too hard for them to win already from the start, so they lose how to race, they lose the sense of racing. That’s why it's good for him to do some small races as well, like Dunkirk. Two stage races, then the Classics and some smaller races, then the Vuelta or something – then you have quality and chances to win.

CN: What’s the main difference between you, physically?

LN: I'm taller. We have the same weight I think. He's more muscular, than me. I'm taller and smaller.

ON: He's a bit faster in the sprint but I climb a bit better, maybe just because I've done it more, I don't know. The races when we’re both in shape, he's always around me, like just not in my group maybe.

ON: H'oh. These are difficult questions! There are a lot of similarities. We are both enthusiastic, outgoing. What's the difference? He's really confident!

LN: But he is also really confident!

ON: That is true. We’re very similar.

CN: Oli, how good can your brother be?

ON: You should never put a ceiling on things. It's really difficult to say. Since he's not been racing for so long, there's still a lot of margin for improvement. In Belgian teams, you're not looked after very well – you have to be strong and it’s like 'see you Sunday, be in shape'. Most Belgian teams have one coach for 30 guys. We have I don’t know how many coaches, so he's going to be more looked after here. How good can he be? Hopefully really good. I have high hopes.