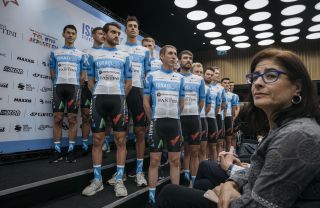 The end of the calendar year is always a time of change in the pro cycling world, as teams new and old come together ahead of a new season, bringing together all manner of neo-pros, new signings, staff, and those already on the squad.

It was no different for the newly-minted Israel Start-Up Nation – formerly Israel Cycling Academy – who gathered new sponsors, suppliers and staff, plus 17 new riders, in Tel Aviv for their pre-season training camp this week.

The team's new star rider, Dan Martin, was among them, fresh from two years spent at UAE Team Emirates. From the outside it's a big move, swapping a long-established, heavily experienced WorldTour outfit for the newest team at cycling's top table, and after spending time with Martin at the team's launch, it's clear that the differences between Israel Start-Up Nation and the rest go far beyond surface level.

While most pre-season camps offer an air of positivity and optimism for the season ahead, the feeling was even more pronounced among riders gathered at the Start-Up Nation Centre in Tel Aviv. More openness, more fun, and a less pressurised environment – those are the key observations Martin has taken from these early days spent with the team.

"Honestly, it's been great – I just feel at home straight away," Martin told Cyclingnews after the team's inaugural press conference on Wednesday. "When I started, I expected it to be very much like Slipstream Sports [now EF Education First, where Martin raced from 2008 to 2015 – ed.] and it's kind of true, you know? It follows Israel as being progressive, innovative, and that's what they explained to me when they first tried to bring me here.

"They'll give us the best platform possible to allow us to perform to the best of our abilities but, also, it's just such a lovely atmosphere. The team has just come together, and it seems to be a good fit straight away. It feels like I've been here a few years already. It's crazy. It sounds like a cliché, but it feels like home. I feel very happy and very relaxed and, so far, it's exactly what I signed up for.

"Some people wouldn't possibly consider it the best performance environment, but I do. I know that this is the kind of atmosphere that I perform best in."

The team's approach, environment and ambitions are very different from Martin's last stop at UAE – and his previous team, QuickStep. During his two years at UAE, the Irishman collected two victories: his stage wins at the Critérium du Dauphiné and Tour de France in 2018.

The 2019 season was a tough one for Martin, with illness derailing his spring goal at the Ardennes Classics, and a team-wide preparation problem ­– possibly caused by a change in sports drink – affecting the squad at the Tour de France. Despite that, Martin managed to pick up a podium spot at the Itzulia Basque Country and a top-10 GC placing at the Dauphiné, although the change in teams is a welcome one.

"I've come from UAE, and obviously they have ambitions to be the best team in the world, with a big budget, and that's replicated in how they approach races," Martin said.

"Whereas this is going to be probably one of the smallest-budgeted teams with a massive underdog status. It's a bit like the path my career has followed the whole time, you know? I've always been kind of overlooked as far as expectations and, yeah, it's a position that I find quite comfortable."

And while winning and competing at the highest level is obviously still on the menu, the 33-year-old has moved into a different role and gained a new perspective on racing upon joining his new team.

Fatherhood has played a role; Martin and his wife Jess welcomed twin daughters into the world in late 2018. There's also the team's status, with a number of riders and staff new to the WorldTour, in contrast with Martin, who has now clocked up 11 seasons of top-tier racing.

"It's also a position as a mentor," Martin says. "I think Kjell [Carlström, team manager] understands that he doesn't know everything, and that he wants to have that kind of experience and to help the team progress.

"That's part of the reason why I'm here – to try to bring that experience and teach these guys what level you need to be at to be competitive at the WorldTour, what the team needs to do, and how to approach it.

"It's a different style of racing – really different. It's so much more competitive, and cycling as a sport has become more and more competitive over the years. Hopefully, I can help in every way possible, even the small things. It's been an open line of communication between me and the management since I signed, as far as preparing the team to step up to this level. It doesn't just happen overnight."

As well as the mentorship role that comes alongside his role as a leader out on the road, there's another component of the move that appealed to Martin. Put simply, the fun of cycling and racing a bike.

"It's always been my line in cycling. I always try to keep a realistic and fun perspective on things, you know? I think that's become more so since I've become a father. It's kind of like I'm spending all this time away from home, and I just really want to enjoy myself, to have a good laugh at the dinner table.

"This atmosphere should lead to that and, so far, it has. Obviously, that can always change when you're out on the road when the pressure of racing starts, and the pressure of results starts. The problem is that it's becoming more difficult to win every year. There are no small races anymore, no easy races, so any victory is a big deal.

"Perhaps it's even my job to keep that realism and ease the process. It's this relaxed approach – and not setting lofty expectations on ourselves – that will lead to success."

Martin had agreed to join the team back in August, two months before the Katusha-Alpecin buyout, and, while the team's WorldTour status was confirmed this week, he was prepared to 'take the risk' and move to a Pro Continental-level team.

Had things panned out that way, not every WorldTour race would have been on the calendar, but Martin was confident from the earliest meetings that the team was right for him, whatever races were available to the team in 2020.

"I sat in the directors' meeting the other day and they said, 'Well, what races do you want to do?' and I said, 'I don't know.' I really just want to have fun. I've done all the biggest races; I've got results in many of them. Now it's just a case of racing my bike, having fun, and choosing my programme around the races that suit me best, irrespective of what race it is," he said.

"Obviously, it doesn't give you guys a headline because we'll wait and see what the courses look like. But it's kind of fun as well because, at the end of the day, I think at this point in my career I've learned so much, and it doesn't matter what I do in March, which races I do in February, and it doesn't change what preparation I do right now or in January.

"I'm still going to prepare the same way, and go through the same training, and then we'll see what condition I'm in and see which races I can go best in and get results in, and we'll attack those races with extra motivation. That sums up the relaxed nature of this team and how relaxed they are."

The Ardennes Classics – one of Martin's happiest hunting grounds with three podiums at Flèche Wallonne and his famous 2013 victory at Liège-Bastogne-Liège – and the Tour de France are on the menu for 2020, but there's a sense that much of his calendar is up in the air.

At the team's opening press conference, team co-owner Sylvan Adams talked up stage wins and general classification challenges at all three Grand Tours, while Martin was more measured, speaking of the pros and cons of going for stages versus GC bids.

The sense that he was keen to target victories after a winless 2019 campaign was confirmed later on.

"I've been fortunate to always have a certain amount of freedom," he said. "But as far as standing here now and putting a heavy goal over my head, or whatever, I'm not interested. I just want to win races next year. I've had two seasons in my career that I haven't won a race. So, yeah, I want to get back to winning ways."

"I'll do the Ardennes because I like doing the Ardennes. The Tour suits me better than the Giro, so I'm going to do the Tour. But, other than that, we need to sit down, plan, calculate and get into those races in the best condition possible. We'll see how it goes."

There's some familiarity among all the change for Martin, then. And after just a handful of days spent with his new teammates, he already seemed at ease, relaxed, and altogether satisfied with his new situation. If he's right ­– that he's at his best when in this kind of environment and mood – then we might just see Dan Martin back on top in 2020.