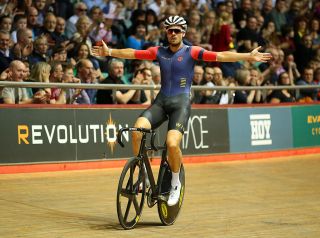 Jonathan Dibben is raring to go as he prepares for a second chance at WorldTour level with Lotto Soudal in 2020.

The 25-year-old was part of Team Sky between 2017 and 2018 but dropped down to domestic racing this year with Madison Genesis after his contract was not renewed. A year on home soil and a new start have given the former world track champion a sense of perspective and the motivation to prove that he deserves to race on the highest stage.

"From where I am now, I just want to get back into racing at the WorldTour level and deliver. It's not necessarily about results for myself but more so about slotting into the job that I've got. I just want a good and consistent season. I want to stay injury-free for the year and get stuck in," Dibben told Cyclingnews at Lotto Soudal's recent training camp in Spain.

The chance to sign for the Belgian team came about this summer with the squad's management looking to bolster their sprint lead-out to help Caleb Ewan and Classics options for the new season. Marc Sergeant and John Lelangue highlighted Dibben, a former runner-up in the U23 version of the Tour Flanders, as a potential recruit and during the summer Dibben met with the team's hierarchy to discuss terms.

"Back in July my agent messaged me and said that Marc wanted to meet. We'd already had a bit of chat towards the end of 2018 but nothing had come of it but I met with the team during this year's Tour, on one of the rest days, and agreed soon after that. I live near Nice so I drove over to Toulouse to see them. They explained what they were looking for and how they saw me fitting in with their plans. I had to agree with them because it was very much how I saw myself as a rider."

With Ewan and new signing John Degenkolb for the sprints and a much-improved Classics team built around Philippe Gilbert and Tim Wellens, there will be no shortage of opportunities for Dibben. He will start his season in Australia at the Tour Down Under before racing the UAE Tour and then the Belgian Classics.

"I'm going to mainly help the sprint aspect of the team. They delivered so many results this year and wanted to bolster the squad in the leadout department. They have John Degenkolb arriving for the new season, so with two top-class sprinters, and the Classics, they wanted me to have a go at them as well."

A year on the domestic season with Madison Genesis saw Dibben race a shorter race schedule in 2019 but the British rider found the experience to be a positive one.

The news that Madison would cease to exist at the end of the Tour of Britain in September came as a surprise to many but Dibben has no regrets over his 2019 campaign, especially as it gave him the Launchpad to return to the WorldTour.

"It was different. Not so much the team aspect, because Madison was really well set-up and you had everything you needed to be a full-time bike rider. It was more just about the adjustment of going back and doing more of the one-day criteriums in Britain. They're more explosive than the European races I have done in the past. It was different. The races in the UK are raced full-gas and they're all similar in terms of race profile. You know that there are going to be some short, sharp climbs and what tends to happen is that everyone goes flat out on the first climb of the day and there are 30 guys left for the rest of the race."

"I was hoping to come back to the WorldTour though. I was racing with Madison at the time and thinking about the track side of things but when Lotto came with the chance of staying on the road and the WorldTour, I thought that it was a really good option, so I took it.

Dibben's first spell at the WorldTour with Team Sky was a mixed experience. He enjoyed success in his first season with a stage win at the Tour of California but his second year on the team saw a downturn in fortunes and form.

"I started the season out of shape and then by the time I got to July and got back into really good shape I crashed in RideLondon, so I didn't really see out that form and see it translate into races. 2020 is a real second chance to get back to where I was in 2017 and improve on that. I felt like I learned a lot at Sky and I took all that.

"It almost feels like I'm turning pro again, with a bit of knowledge of how the races are going to be. Already in December, I'm in better shape and I hope that translates into the new year. I have the second chance now so I'm hoping to make the most of it."