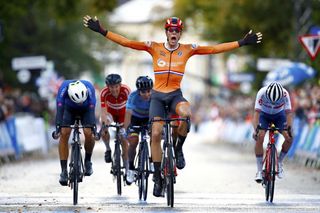 Nils Eekhoff is looking to channel his devastating experience at the World Championships in Yorkshire into something more positive ahead of his debut season in the WorldTour with Team Sunweb.

The Dutchman crossed the finish line first in the Under 23 road race in September but was then disqualified from the race when a jury was asked to look back at video footage after the Dutch rider crashed with just under 130km to go and then used the slipstream of a team car to come back to the peloton.

Eekhoff was only made aware of his disqualification after a lengthy post-race delay, during which he celebrated with his teammates. The matter of the disqualification is now with the Court of Arbitration for Sport (CAS), although no date has been set for a hearing.

At Team Sunweb’s recent team presentation in Amsterdam, Eekhoff admitted that it took time for him to process what happened at the World Championships but that he is determined to use the experience in a positive way.

“I’m actually quite positive. Of course back then it was really hard but I’ve had time to think things over. I went on vacation and set my mind straight. Now I’m just looking forward to getting the season going and the future,” he told Cyclingnews.

“I’m really proud of my performance that day and what I achieved. Then it’s really a shame how it worked out with the decision of the jury. That moment has already been taken away from me and I won’t get that back but I have the footage and I have in my mind how strong I was that day. That’s not going anywhere and I’ll have that in the future.”

While Eekhoff is determined to move forward and get on with what he hopes are the best years of his cycling career the CAS issue still rumbles on. However the 21-year-old knows that he cannot let himself become embroiled in the ongoing case and first year at WorldTour will have enough challenges.

“The team, and the cycling world in general, have given me a great reaction. The case is now at the CAS but all parties need to complete their paperwork on the decision. That’s ongoing but I don’t know where it is now. In theory I could still become the World Champion but it’s all down to interpretation.”

The former Under 23 Paris-Roubaix winner has not received his full race programme yet but it’s likely that he will form part of the Classics group within Team Sunweb for the first part of the season. A debut at the Tour Down Under is not on the cards, but Eekhoff is open to the idea of taking on a Grand Tour in his first year as a pro rider.