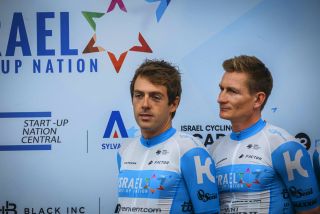 Twenty riders from the folding Katusha-Alpecin team have found new homes for 2020, including seven men who managed to jump across to the team's successor, Israel Start-Up Nation. Among that small group is Alex Dowsett, the Brit who had raced with the Swiss team for the past two seasons.

Earlier in December, Dowsett, his six Katusha teammates and 23 other riders convened in Tel-Aviv for the pre-season training camp and presentation of the WorldTour's newest team.

While he was there, the 31-year-old told Cyclingnews about the stresses of the past season, what he likes about his new team, and how he hopes to achieve a long-held Olympic dream in 2020.

"It was probably one of my better years on the bike, but one of the worst in terms of the stresses and uncertain future which was completely outside our control," says Dowsett, sat in the lobby of the team's beachfront hotel in Israel's second city.

"It's behind us now and I'd like to never be in that position again. It makes you realise how vulnerable you are to some business deals going on in meeting rooms that you have no idea about, while you're just living off the rumour mill and trying to race."

Dowsett says that Katusha's – and by extension his own – future was up in air from two days before the start of the Tour de France, all the way up to when the Israel takeover was completed in early October. The Road World Championships in Harrogate was where he received assurances that he'd be part of the team going forward.

"I guess the day after World Championships time trial was when I sat down with Kjell [Carlström, team manager] and confirmed that this was where I would be. Not all of us contracted riders made it across. So, it was quite a long time spent wondering.

"No, I wasn't confident," he says, referring to his chances of securing a spot on the team. "I was confident that my contract had to stand. So, if we're talking about being able to pay the bills for the following year I was as confident as I could be about that. The team wasn't going bankrupt, it was merging. So, my contract was still valid."

The alternative future timeline for Dowsett was a lot different to remaining in the WorldTour, an altogether riskier proposition.

"My parallel version of how the up and coming season would've run was that I would've stepped away from a team and focussed on the Olympics, Worlds, Euros and Hour Record for the year. Sort of under the full support of Team GB.

Moving to another team was, of course, an option, as numerous other riders – Ilnur Zakarin (CCC Team), Nathan Haas (Cofidis), Harry Tanfield (AG2R La Mondiale) – have done. But, once again, there were risks attached, this time of monetary value given the precarious position of searching for a deal so late in the year.

"The problem was that to take an offer from another team would've been to lose that contract, lose my wage for the following year. And when you're looking at late September, they know you're desperate, and desperation comes at a different value, I guess.

"Most teams were simply full, so it's more like you're doing them a favour rather than providing value to the team. And I'd never want to go to a team as a favour. So, in my mind those were the only two options.

"It was quite an unpleasant year on that side of things, but a good year on the bike," he reaffirmed.

A different kind of team

So, to Israel Start-Up Nation, then. It's a team Dowsett had admired from the outside thus far, with their goals outside of the sport drawing an admiring nod alongside those of Team NTT and Novo Nordisk.

The team runs youth programmes, boarding schools and community centres across Israel, contrasts with Dowsett's previous stops at Katusha and Movistar in that regard. One day of training camp saw the team head out of Tel-Aviv to one of the boarding schools, where they all mucked in to construct a cyclo-cross course in a dirt field.

"That was a bit different. I was just there thinking 'what would Mathieu van der Poel do?" Dowsett joked. "I like that the team has a goal outside of just the competitive side of things. I like a lot of the teams that do that.

"Dimension Data is the obvious one, along with Novo Nordisk, and it's something I try to do with my charity for haemophiliacs, Little Bleeders.

"Katusha and Movistar are different. Movistar is a business. It's a passion for racing bikes but it's still sponsorship, exposure and winning bikes races gives return on investment. Katusha was a bit different again. It was about bike racing whereas this is a bit different."

While his last year at Katusha won't be one to remember off the bike, Dowsett at least has a number of strong results to dwell on and build on for 2020. After two years out of the national champion's stripes, he took his sixth British time trial title in June, and days later went close to taking the road race, too.

Later in the season, he took fifth in the time trial at both the European Championships and World Championships, missing out on a medal by one second at the latter and by seven seconds at the former.

"It was one of my most consistent years. I was solid throughout, which was good. The Nationals was my only win. I came painfully close to a bronze medal at the European Championships and World Championships, but it was nice to be in the mix, at least.

"Lead outs-wise, I did a good job; I was always there. I scraped myself through the Tour de France. I had some real rough days and there were things I would've done differently but it was what it was."

All eyes on Tokyo

Next year, an even bigger goal looms. The time trial at the Tokyo Olympic Games is Dowsett's main aim of the year, even if he's not assured of a place in the Great Britain squad yet. It's an event that he has always dreamt of being a part of, he says.

"As a cyclist, there are lot of boxes I wanted to tick during my career, and I've ticked a lot of them. The Oympics was one thatt I thought I was potentially going to miss, but I think that after the Worlds it's back on the table.

"It's a huge ask, because of who I'm up against, because the course is a touch hillier than I would perhaps like, and also being British you don't just go to the Olympics to ride a bike – you go there because you have a shot of getting a medal or actually winning the gold. So, there's some work to do because there's still a two-minute gap to Rohan Dennis. But yeah, everything is for that."

The criteria for making the cut is vague, according to Dowsett, and not made any easier by the rule which will force teams to include their time trialists in the road race squads. Great Britain will field a four-man team, one fewer than the maximum quote, making selection even tougher.

"If I have to be part of the road race team, then me being there would dilute the team with it being such a hilly race," he says. "I can't do the job of someone like James Knox, Tao Geoghegan Hart, the Yates brothers or Froome and Thomas. Being British and knowing the selection policy, you're not going if you're not a medal contender, it's as simple as that.

"In Rio there were track sprinters lining up to fill out the numbers. It's all a bit vague, a bit of a mess and it makes a bit of a mockery of our sport, because the Olympics are meant to be the pinnacle. And at home tthere are a lot of guys who should be starting too."

While the Olympics is foremost in his mind, a return to the track for another crack at the Hour Record is also a possibility at some point further down the road. Dowsett's new teammate, Matthias Brändle, is another ex-Hour Record holder having set a distance of 51.852km in October 2014. Eight months later the new record of 52.937km was Dowsett's, though now it lies with Victor Campenaerts at 55.089km.

Brändle has mooted giving it another try, and Dowsett hopes to do so as well, though there's no concrete plan or timescale in the works.

"I reckon he's made the same mistake I have a few times, where the journalists asks and then you say 'yeah, of course I want to' and 'ideally, I'd do it next year' and the next thing you know, the headline says 'Dowsett targets the Hour Record.'

"In reality, the team has to be fully behind it. I brought it up with Katusha once or twice, but they had far bigger problems. We were down to 22 riders, I mean we had a sick rider going to a race, signing on and going straight to the hotel basically, just so we didn't have to pay the fines. So we couldn't have done it the past two years.

"Now, I think that with Factor Bikes there's scope to produce something quite special. 2020 is about the Olympics, that's clear. So yeah, I would like to do it again, but there's no rush."

Before a potential Hour Record assault, and even before the Olympics, there's the regular road season to think about. Dowsett's plan isn't yet finalised, but he has a good idea of where he'd like to go. All building up to that shot at a medal in Tokyo, of course.

"I start in Australia with the Cadel Great Ocean Road Race and the Herald Sun Tour. None of it is 100 per cent confirmed, but I'd head back to Europe and do Tirreno-Adriatico, Milan-San Remo, Tour de Romandie and the Giro d'Italia.

"Then I'd shut down the road racing and hone in on the Olympics. That's what I'd like to do. If I can do that, be allowed to quietly go away and train for the Olympics, then they can do what they hell they like with me for the second half of the season. It's a very much Olympic-oriented season."