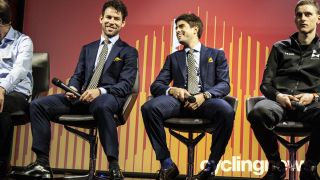 Mark Cavendish and Mikel Landa share a moment ahead of discussing their new roles within the Bahrain McLaren set-up (Image credit: Aaron Borrill)

Following a disastrous three-year period at Team Dimension Data – blighted by crashes, illness and a general lack of form – Mark Cavendish will be hoping to turn things around with his new team, Bahrain McLaren.

The Briton looked upbeat ahead of the team's kit and equipment reveal at McLaren's Technology Centre in Woking, Surrey, on Monday. He told Cyclingnews that he's focused and ready for 2020, and excited by the infrastructure and morale at his new team.

"I think from a personal point of view, it's nice to work with people you get on with, and it's important that people are good at what they do. Rod [Ellingworth] is not afraid to roll up his sleeves and get involved, and he knows how to get the best out of me," he said.

"The team is full of hard-working, brilliant minds, and when you have a structure and a high-performance team like this, results are inevitable. It makes me happy and excited, and I'm full of confidence."

After failing to make Dimension Data's Tour de France squad this year, Cavendish found himself at a crossroads, and was forced to sit on the sidelines and re-assess his goals – something that forced him to turn his focus to the Six Day London track event in a bid to rekindle some form and his love for the sport.

There's no denying the 30-time Tour de France stage winner's newfound confidence, despite being tight-lipped about his ambitions and race calendar for next year.

"The programme for next year is not sorted yet but, for now, it's about getting through the winter – that's how it has always been for me. I've got a good year behind me, and we'll take every day as it comes," he said.

'The ambience and team spirit is amazing, and we feel like a unit'

Cavendish will relish this opportunity to perform at his best, especially as part of a set-up such as McLaren's, where the notion of winning races, not coming second or third, is part of the culture. According to team principal Ellingworth, "Planning to win races is part of the process, and this will take precise planning and execution."

Whether the Manxman gets his shot at usurping Eddy Merckx's Tour de France record of 34 stage wins, only time will tell, but given Cavendish's competitive nature and never-say-die attitude, it’d be no surprise to see him dressed in his team's new papaya-orange kit come the Grand Départ in Nice on June 27 next year.

One thing is for sure: Bahrain McLaren is a team on a mission, and every rider a pivotal cog in a well-oiled machine.

"I've raced for some of the biggest teams in cycling, and you see little things that make them successful, but when you come to a new team like this, the new philosophy gets you quite excited, and the goals are all pointing to one place. You know you're in a good spot in terms of performance," he said.

"I'm excited about the team. The ambience and team spirit is amazing, and we feel like a unit."

The team heads to Hvar, Croatia, next week for the first training camp before a squad travels to Australia for the first race of the 2020 season, the Tour Down Under.