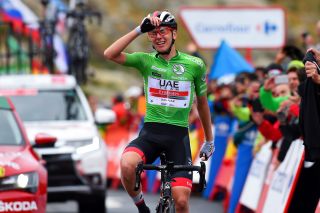 After his stunning Grand Tour debut at this year's Vuelta a Espana, where he won three stages and finished third overall, Tadej Pogacar will make his Tour de France debut in 2020, although he's putting no pressure on himself to challenge for the title.

The 21-year-old's Vuelta performance was just one chapter in an extraordinary debut season as a professional, which also saw titles at the Tour of California and Volta ao Algarve.

With expectations having shot up, careful thought went into his Grand Tour planning for next season and, despite reports linking him to the Giro d'Italia, he will instead focus on the Tour de France in July.

"With the team, we designed two programmes – one for the Giro and one for the Tour – and we decided that, from all points of view, the Tour was the best idea," Pogacar told Cyclingnews at a UAE Team Emirates training camp in Spain.

"The Giro programme is more stressful. If I want to do well in the UAE Tour [in February], I don't have so much time to prepare for the Giro. If I do the Tour, there's more time and it's less stressful."

Pogacar will begin his 2020 campaign at the Volta a la Comunitat Valenciana before riding the UAE Tour and then Paris-Nice in March to start to get to grips with French roads. A possible outing at Milan-San Remo will precede the Tour of the Basque Country – where he was sixth overall this year – and the Ardennes Classics.

After a break, he'll build up to the Tour de France with altitude camps and the Criterium du Dauphine. Also on the agenda is the Olympic Games road race in Tokyo, which takes place less than a week after the final stage of the Tour.

Pogacar was keen to play down any sense of expectation for the Tour, highlighting Fabio Aru as team leader.

"I will just go to the Tour with the same feelings as the Vuelta. I will try to learn as much as possible. If Aru feels really good, we'll go for the yellow jersey and I'll support him 100 per cent," he said.

"I like this role. I don't have so much stress or pressure. The result doesn't matter. It's just to see how it is, with a view to the future. I can just relax and learn about the three-week adventure that is the Tour."

"The Vuelta is a lot different to the Giro or Tour. Every Grand Tour has its own story, and you cannot just expect that if you win the Vuelta you can win the Tour. There are different riders, more pressure and stress. I just want to see how it goes. Of course, I want to be in top shape and do my best, but with no pressure."

Looking back on his first season, Pogacar described himself as "more surprised than anyone" by his instant impact at the top level.

After feeling strong at the Tour Down Under in January, he won a stage and the overall at the Volta ao Algarve before finishing sixth overall at the Tour of the Basque Country, widely regarded as one of the toughest week-long races. After sickness knocked him back in the Ardennes, he targeted California – a WorldTour event – and won it, going on to place fourth at the Tour of Slovakia ahead of that magical Vuelta.

"I tried to push it away at the time, but I don't know for sure if I'll ever realise what I did this year," Pogacar said. "With every race, I surprised myself, and I hope I can do some more surprises next year."

However, he refuses to get carried away and, the day after Greg Van Avermaet said young talents might have earlier peaks but shorter careers, showed he was thinking carefully about his long-term development.

"I did a really good year but I still need to improve more to be besides the best names. I'm going in the right direction, I think, but I have a lot of room for improvement," he said.

"One of the things is time trialling. I think I can do much better and I'm doing a lot of work on it now so I should improve a lot over the next years. Also tactics. I made a lot of mistakes this year. Even races where I won, I sometimes made mistakes, but I've learned quickly. I've learned to be more patient, and also to go by your feelings."

Winners of the Tour de l'Avenir are always predicted to go on to achieve great things, but Pogacar said his career ambitions have crystallised after reflecting on 2019.

"My ambitions are more clear now. For sure to win a Grand Tour – to win the Tour, Giro, Vuelta," he said.

"I just want to improve until the point I cannot improve anymore. I will do everything to be the best I can be, and we'll see where that takes me."