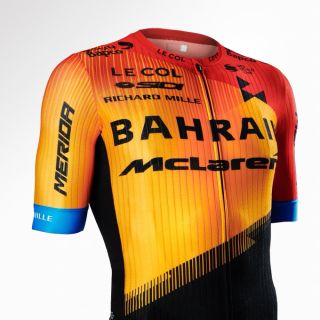 The Bahrain McLaren team have unveiled their new colours and branding for 2020, showing off a new orange, red and black kit and matching Merida bikes during a preview event at McLaren's headquarters in Woking, England.

The new clothing is made by British company Le Col, which was founded by former rider Yanto Barker.

The 2019 Bahrain-Merida team confirmed last week that they will race as Team Bahrain McLaren in 2020 as they continue to transform following McLaren's involvement in the team. Both the cycling team and the McLaren Group, which includes the Formula 1 team, sports car production and other technology companies, are controlled by the sovereign wealth fund of the kingdom of Bahrain.

The new colours mark a significant shift from the largely red kit the team have worn since their inception in 2017. The torso is predominantly orange, changing to red on the left shoulder and arm, and with blue trim on the sleeves. British neo-pro Fred Wright showed off the new colours in official Le Col photographs

"We were struck from the outset by Le Col’s relentless desire to continuously innovate. The culture fit with McLaren was natural and immediate; we scoured the cycling landscape with the aim of finding a brand that could deliver the best performing kit in the WorldTour," said Bahrain McLaren team manager Rod Ellingworth.

Barker said: "This is the perfect time for us to enter the WorldTour; the conventions of cycling kit design are mature and they’re ripe to be disrupted. We have already been working hard to develop bespoke kit for some of next year’s toughest stages at the biggest races."

This winter saw the departure of Vincenzo Nibali to Trek-Segafredo and the arrival of new team manager Rod Ellingworth. Bahrain McLaren have signed Mark Cavendish, Mikel Landa and Wout Poels for 2020, with Tour de France stage winner Dylan Teuns and fast men Phil Bauhaus and Sonny Colbrelli are staying with the team. The team's new additions make up for a number of losses in the transfer season. In addition to Nibali, the team fired Rohan Dennis for prematurely quitting the Tour de France.

Team Ineos confirmed they have signed Dennis just hours before Bahrain McLaren unveiled their new colours, in a sign the two teams may compete intensely in the years ahead.

Ivan Cortina showed off the new colours at McLaren's headquarters, in the presence of Cavendish, Poels, Landa and other riders. Due to UCI rules, new riders cannot wear the new Bahrain McLaren colours until January 1, 2020, and so they remained dressed in tailored suits.

Ellingworth will have the support of former British national champion Roger Hammond as Performance Director, with Duncan Bradley of McLaren as Technical Director. Brent Copeland moves to the new position of Operations Director.

Merida is no longer a title sponsor but remains as bike partner and the team showed off their new bikes for 2020, with the frames sharing the same orange and red colours. Bahrain McLaren will use Shimano components, Prologo saddles, FSA and Vision bars and stems. Other technical sponsors include Rudy Project helmets and sunglasses, Sidi shoes, Scicon and Elite.

"This is a great moment in the story of our team – joining forces with Bahrain World Tour Cycling Team to challenge the conventions of a sport we love and respect is exciting for everyone involved," John Allert, Joint Managing Director of Team Bahrain McLaren said.

"We hope to give cycling’s passionate fans something new to cheer – this is a team built for tomorrow, with a great respect for the past. McLaren will bring technology to the team, a culture of continuous improvement, dynamic marketing and innovation forged in the most technically demanding sport in the world – F1. However, this is a phenomenally competitive sport, and we don’t underestimate the challenges nor the strength of our competition."