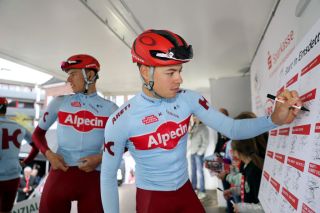 After a debut WorldTour season with Katusha-Alpecin that he says "couldn’t have gone much worse", Harry Tanfield finds himself with something of a second chance, as he joins AG2R La Mondiale for the 2020 campaign.

The British rider shouldn’t, however, have been looking for a second chance in the first place. Having signed a two-year neo-pro contract with Katusha-Alpecin at this time last year, the time trialist and rouleur was left "high and dry" when his team announced a takeover by Israel Cycling Academy last month.

For a number of months, the future of Igor Makarov’s team was up in the air, until Israel saw the WorldTour licence as their ticket to the sport’s top tier and completed the takeover at the start of October.

With the team already having signed several riders, including Dan Martin, space on the 2020 roster was limited, and the new management had to decide what to do with the 11 Katusha riders with contracts for 2020. Four of them have so far made the move across but, according to Tanfield, around half were told they had no place.

"We got a letter in July saying the team was probably going to stop, 'but don’t worry, we’re sorting something out. Riders with contracts, you’re all safe. Whatever happens, the licence is staying with something of some description'," Tanfield told Cyclingnews at AG2R La Mondiale’s recent get-together in the French Alps.

"Then it got to late September and they were, like, 'Ah, right, OK, we’ve sorted something out now but half of you with contracts have to go.' So it was, like, 'Ah, thanks for letting us know when it’s pretty much October – fantastic.'"

Tanfield had recently lost his mother and, as such, describes the news as "the last thing I needed". Not that he received the news directly.

"I was left high and dry, basically. They probably would have paid our salaries – I don’t know, it never got to that level – but I didn’t care about the money; I wanted to stay in a team and keep progressing. It’s just the fact that you feel you’ve been strung along, basically. You think you’re safe, secure for the coming year, and then you get that."

Tanfield's agent, Philippe Raimbaud, quickly picked up the phone and started calling team managers. The first was Vincent Lavenu at AG2R La Mondiale, since Tanfield came close to signing for the French outfit last year before deciding to stay on a Canyon bike with Katusha.

In these situations, it’s not uncommon for the folding team to pay the rider's salary, even on a new team, but Lavenu confirmed to Cyclingnews that AG2R are paying Tanfield from January onwards. However, they’re not paying as much as he was on before, meaning that Israel/Katusha are paying around €5,000 to match the salary on his original contract.

Once AG2R received official confirmation from Katusha that Tanfield was free from his contract, the deal was done and new contracts were sent back and forth in the post before Tanfield's place in the French WorldTour team's line-up for 2020 was announced last week.

"It's actually worked out well. They actively encouraged us to search for a team, which I'm thankful for, and we came to a nice agreement," he said.

"I found a team and get the salary I signed for, AG2R get a rider for less money, as such, and Katusha still save money on a rider they don’t need to pay out."

'I just got a kicking'

Tanfield was full of enthusiasm after an 11km hike in the Alps, in which he brushed off his GCSE French and started getting to know his new teammates. He's eager to get going, with a point to prove after a bruising introduction to the WorldTour.

As he put it: "The start of the year couldn't have gone much worse. I just got a kicking."

Tanfield didn't finish a race until the Nokere Koerse in late March, but that was part of a spring Classics campaign that was still dominated by DNFs. He rode the Omloop Het Nieuwsblad, Kuurne-Brussel-Kuurne, Gent-Wevelgem and Dwars door Vlaanderen, and described it as a baptism of fire.

"I basically just felt I was a pure shell in the Classics," he said. "I barely got around anything. I just felt horrible – I felt I couldn't do a job, I couldn't do shit. I was cooked after, like, two-and-a-half hours, when the race was only starting, so I was useless.

"You can have all the gas you want, but actually the whole thing is so aerobic and you just have to be able to ride really high watts per kilo to survive, and also be really efficient. I kind of lost that doing track in the winter – it's the polar opposite. It took a long time to get on top of it. I was nowhere near the level I was at in 2018, power wise, for a good part of the year – at least until August-time."

Towards the end of the season, however, Tanfield did show some glimpses of the rider who won a stage at the 2018 Tour de Yorkshire with Canyon-Eisberg. He placed fifth in the short time trial at the BinckBank Tour, before a solid display at the Tour of Britain and then a bronze medal in the team time trial mixed relay at the World Championships.

At AG2R, he'll look to build on that, slotting into the Classics squad while also honing his time trialling on a new bike and with new equipment – which he described as his main concern in changing teams.

"What I did in those races towards the end of last year, I need to be doing throughout the year, not every once in a while. I have to be more robust," he said.

"My role will be similar to last year. I'll do the Classics, and we've got a good little group here, with Oliver and Lawrence [Naesen], Stijn [Vandenbergh], Sylvain [Dillier]. I want to learn from those guys, and not be a pure shell.

"We haven't spoken about the other races yet, but I just want to kick off the year. I want to come in strong for the first part of the year, press on, and hopefully get a contract extension."

Thankfully, a line can now be drawn under the Katusha-Alpecin episode, even if the clock can't be wound back.

"I'm really grateful to Vincent for giving me the opportunity again," Tanfield said. "I wish I'd taken it before."