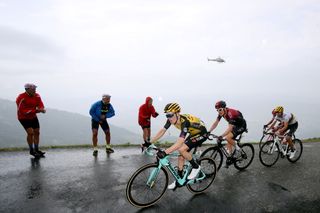 Team Jumbo-Visma have yet to announce their 2020 Tour de France plans but podium finisher Steven Kruijswijk is confident that the team is closing the gap on perennial winners Team Ineos.

Jumbo-Visma finished the year with a Vuelta a Espana win courtesy of Primoz Roglic, and podium places in both the Giro d'Italia and Tour France. They find their GC contingent bolstered ahead of next season with the arrival of Tom Dumoulin from Team Sunweb, and Kruijswijk – who finished third in the Tour this year – believes that the squad has what it takes to knock Ineos off their perch.

"I'm convinced that with the team we have, and the riders that we have, we can be in for the win at the Tour," Kruijswijk told Cyclingnews at Jumbo-Visma's team camp in Spain.

"If you look at it team-wise then the gap is getting smaller. We're different though because we also concentrate on the sprints and the Classics. We're a more rounded team than Ineos, who just focus on stage races. We're closing in for sure. We were on the podium in every Grand Tour this year and we won stages in every Grand Tour. And this year we've shown that we can attack or control a race."

Ineos have won every Tour bar one since Bradley Wiggins' triumph in 2012, and in 2019 the team finished first and second courtesy of Egan Bernal and Geraint Thomas, but with the hiring of Dumoulin, Jumbo-Visma have one of the few riders in the world capable of troubling the serial Tour winners.

Jumbo-Visma will announce their Tour plans at their team presentation in Amsterdam at the of the week , but Kruijswijk is convinced that no matter their line-up winning the Tour will only become harder for Ineos in the future.

"We're coming closer and closer. Even guys like Pinot and Alaphilippe are there. It's not getting easier for Ineos."

To beat Ineos at the Tour a team will need to wrestle control of the race at key points and nullify the British team's predictable but emphatically successful tactic of grinding their rivals into the dust before unleashing a killer attack in the mountains.

Jumbo-Visma believes that matching Ineos's strength in depth in the mountains will be key and the Dutch outfit - along with Alaphilippe and Pinot – gave Bernal and Thomas their closest fight in years in July, thanks in part by having a deeper squad.

"Technically they do the same each year," said Kruijswijk.

"They play the waiting game and then control. Until now they had the strongest guys at the end of races when it came to finishing uphill. For them, it was quite easy to keep it controlled before finishing things off. They just needed to do that one or two times in the Tour and then for the rest of the time just control."

Of course, Kruijswijk knows how to put teams like Ineos under pressure. In 2018 he blew the Tour wide open with a long-distance break over the Col de Madeleine and Croix-de-Fer that put over six minutes into a Team Sky-led peloton. The Dutchman was eventually caught on the slopes of Alpe d'Huez but only after Bernal was forced to pull the race back together, and those long-range attacks could be the key to next year's race.

"If the opportunity is there, for sure," Kruijswijk says.

"That's how you can crack them because if you let them do their thing and bring their guys to the last few kilometres of a climb then they will finish it. Once it was Froome and now it's Bernal so you need to put them under pressure earlier in the race and make guys like Kwiatkowski work earlier. You need to try and crack them earlier in the race."

The arrival of Dumoulin threatened to ruffle feathers within the Jumbo-Visma coop. After all, Roglic won his maiden Grand Tour in September and Kruijswijk picked up his best three-week result in July of this year. Slotting in another stage race specialist could go one of two ways, and according to Kruijswijk, it took some getting used to at first. However, the 32-year-old now sees the signing of the 2017 Giro d'Italia winner as a huge boost for the team.

"I knew about it a little bit earlier. The team informed me that there was a possibility of him joining. For sure my first reaction was surprise but not shock. I knew that he had a long term contract so I didn't see it coming. Right away I looked at my own ambitions and role in the team and to be honest I thought 'what does it mean for me if he's joining the team?' I had to process that for a little while but I saw the advantage of him being part of the team," Kruijswijk told Cyclingnews.

"If you want to be with the best team in the world then you need strong riders. The competition in the team is getting stronger. Tom coming here brings the level up and I can improve and learn from that. We have more options to play and it gives maybe more options to win a race. Sometimes I'll maybe have to help Tom, sometimes he might need to help me but it will be clear who is strongest. As long as we trust each other and go for the win with the team, that's the best idea. He believes in our team and our guys, so it's a big compliment that he's here. He's an easy-going guy and it's been really natural having him on the team this winter."

As for Kruijswijk's 2019 season, the campaign can be considered a glowing success after he secured his highest ever finish in a three-week stage race.

"It was my best year so far. The Tour de France was one of my main targets of the year and I succeeded in getting on the podium. I was chasing that for a number of year's and it meant a lot to finally have it. And I did it in the biggest race, which maybe gave it a more of a special feeling."