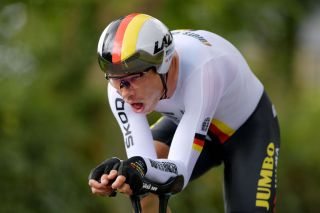 Ask virtually anyone on the Jumbo-Visma management as to who their best domestique was in 2019, and they’ll resoundingly offer up one name, and one name only: Tony Martin.

The veteran rider has revived his career this year at the Dutch team after two seasons at Katusha-Alpecin stagnated the 34-year-old’s time in the sport. This season he has played pivotal roles in team time trials and raced both the Tour de France and Vuelta a España.

Although he was ejected from the former and crashed out of the latter, he has left a huge impression on his team and his teammates. It’s little wonder that Martin has already been given a Tour de France spot for 2020.

"This has been a bit like a second life in cycling for me, that’s true," Martin told Cyclingnews.

"After winning a lot of races at QuickStep and HTC I was in a bit of a wasteland at Katusha. I came here with a lot of hopes and wishes around my career, and it just felt natural to step into the role of a domestique. I realized that I’m no longer the guy who can bring in the big results and that’s okay with me.

"I still found myself in a position here where I was in a place where I could help the big guys. That gave me a lot of satisfaction. Even without a big victory, it was a super successful year. I found cycling fun again.”

Martin moved to Katusha on the back of winning his fourth individual time trial at the Worlds in 2016. However, his 2017 and 2018 seasons were well below his previous standards.

He misfired in the Classics and cut a tired figure in the time trials that he raced. In that period he won just one race that wasn’t a national title.

"Everything from structure to motivation and good leadership," he replied when asked as to what was missing from Katusha.

"There was no direction on where to go and that was important. A team needs to know where the direction is coming from and where to fight. For sure you can say that it was two wasted years but I still had fun there, and I had friends there. From a professional side, I missed a lot of things but it helped me see the differences between a successful team and a not successful team."

Jumbo-Visma offered Martin a chance to rebuild his career. They helped him salvage what confidence he had left and turned him towards the direction of being one of the best super-domestiques in the world. He raced Grand Tours, became a pivotal player in their team time trial strategy and was trusted with the protection of the squad’s main leaders.

Clarity, it seems, was all that was needed.

"Now I know what my role is. When I came, no one really knew which way it was going to go. The team wanted me for the team time trials but, looking from the outside, I wasn’t sure that they needed me there," he said.

"I was really impressed with the team and when I came I still saw a few things that could be better. Slowly I slipped into the role of a domestique and a bit of a road captain. I’m thankful for that chance and that people were willing to follow me.”

As well as racing the Tour de France in 2020, Martin will target the World Championships in Switzerland, where he will be going for his fifth title in the time trial. He has already announced that the Olympics will not form part of his programme, but the course at Worlds is just to his liking.

"There are the World Championships in Switzerland. The Olympics are too hard for me but this way I’ll have time to recover and then go full gas for the Worlds," he  said.

"Honestly, I’m not that far away, it’s just that the other guys, the young guys, are stronger. On routes that suit me, I can still be there with the best. So the Worlds are a big goal for me and I wouldn’t say that if I thought I was there for fifth place. I want to be there for the medals."

As for having the responsibility of protecting three GC riders at the Tour de France, Martin simply sees it as another challenge and one that he and his teammates can cope with.

"We’ll see. We can manage it. We can learn from Ineos who have handled this and we’ve shown this year that, although we didn’t have three leaders for GC, we still had Dylan [Groenewegen] and Wout [Van Aert] and they were leaders we still needed to protect."