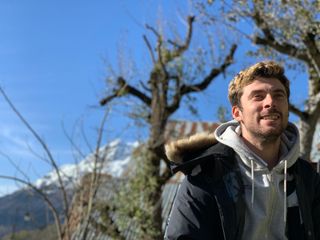 Last week, Pierre Latour was summoned to AG2R La Mondiale’s service course near Annecy and invited into the office of team manager, Vincent Lavenu. Most riders' schedules would be defined at a training camp the following week but Latour was told then and there that he would be leading the team at the 2020 Tour de France.

"I just smiled and said 'ok'," the Frenchman tells Cyclingnews a week later.

Romain Bardet, who has been the team's focal point for the last five years, having finished on the podium in 2016 and 2017, will skip the race entirely, a decision that was formally revealed at the camp in Vaujany on Wednesday.

Sitting alongside each other in front of the press, Bardet and Lavenu both voiced their confidence in Latour's ability to step up to the plate next July.

"It’s cool that the team is putting that much faith in me," Latour says soon after.

"I’m keen to be there and to do as well as possible. I think as it gets nearer I'll start to feel the stress and everything, but for now it’s cool."

Latour's potential was laid bare when he won the white jersey for best young rider at the 2018 Tour, finishing 13th overall as he helped Bardet to sixth place. Having impressed at every turn since making his professional debut in 2015, the Frenchman showed himself to be a Grand Tour leader in waiting, as well as a one-day and time trial talent.

This year, however, he was denied the chance to build on that platform, as a February crash in which he broke both arms ruled him out for more than three months. Unfit to ride the Tour, he went instead to the Vuelta a España, where an uneven display led him to 35th overall.

"It was a good thing I had that sort of responsibility at the Vuelta, even if I didn’t have a great result. It went well and I learned a fair bit, especially about what it takes to compete over three weeks. I know that I’ve still got a fair way to go," he says.

"There won't really be an objective at the Tour, other than to do as well as possible. I’ll give it everything I have but I don’t have an objective fixed in my head. There are so many variables at the Tour that it’s complicated to envision a result. The team is keeping me calm and just saying 'do your best'."

It may not necessarily be next year, but Latour is confident he can improve on his 13th place from 2018, where – it must be remembered – he was slogging himself for Bardet most days.

"I think I can do better, but it depends on the year, who’s there, loads of things. Last year I had that consistency over the three weeks, whereas all the other Grand Tours I've done, I’ve always had good days and bad days."

As such, Latour highlights consistency as his primary focus over the coming months and years. He admits it hardly comes naturally.

The recently-turned 26-year-old is something of a restless personality who is far more impulsive than calculating. What's more, as a rider who is strong across the board without being a true specialist in any one area, his greatest strength is perhaps his ability to go deep, to hurt himself, and drag every last ounce of energy from his legs, which he has surreally nicknamed Brigitte and Bernadette.

The whole combination is rather more suited to the Classics and stage-hunting domain than the conservatism of the general classification hunt.

"What I like about one-day racing is that you can go all-out, you can put yourself in a pitiful state, and the next day you don’t have to race," he says.

"In a three-week race, there are times you can go and gain 10 seconds but you don't do it, because you think 'if I go after those 10 seconds I could lose three minutes tomorrow'."

As an example, he reaches for stage 13 of the Vuelta, where he was the last man standing from the break and was heading for victory on Los Machucos until Tadej Pogačar and Primož Roglič came bursting past in the final 1500 metres.

"I went so deep, because I thought maybe I could win the stage, but the next day I was the most useless guy in the peloton. I'd emptied my reserves and there was nothing left.

"For that reason I find it harder, mentally, to do a three-week race. You have to be calculating, it’s more of a headache, so from that perspective I prefer one-day races."

Latour, however, insists he is still motivated by Grand Tours.

"A three-week race is something really cool. I like the challenge, it's interesting. You don't have to be the best climber nor the best rouleur, but if you're decent in the time trials and decent in the mountains, you can do good things. I like that aspect."

Nor does he seem to feel the classic affliction of the all-rounder: the pressure to specialise.

"I think I can combine one-day racing and Grand Tours. I've always liked doing both and, as I've progressed, it's always been in both – it's not like I've improved on one side to the detriment of the other."

Turn of the year

Latour will begin his 2020 campaign at the Etoile de Bessèges stage race in February ahead of the Drôme and Ardèche Classics and then Paris-Nice in March. His spring will continue with the Volta a Catalunya before a string of one-day races: Tour du Finisterre, Paris-Camembert, La Flèche Wallonne, and Liège-Bastogne-Liège.

After a break, he will set off down the well-trodden path of the Critérium du Dauphiné, French National Championships, and Tour de France.

After a season he describes as 'hugely frustrating', he’s eager to get going.

"Three quarters of this season was rubbish and I just didn’t enjoy it. I had two months where I did nothing, and when I came back, I was awful, and it took me a long time to find my level again," he says.

But find his level he did. After the Vuelta, Latour hit the Italian autumn Classics and placed seventh at Giro dell'Emilia, 11th at Tre Valli Varesine, and ninth at Il Lombardia.

"It started to come good at the end of the season, and that did me good mentally," he says. "I'd prefer to finish well than have a good start and be derailed. You go into the winter with much more enthusiasm."

For now, the prospect of leading the line at the Tour de France seems 'cool', but he knows he won't be able to be this laid-back for long.

"The team clearly believes in me, but I need to prove myself because I still haven't done much yet," he says. "It's time for some results."