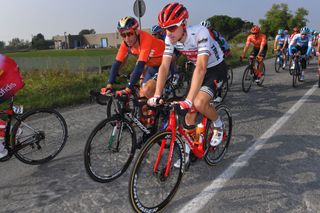 Giulio Ciccone maintains that he can only benefit from learning his trade as a Grand Tour rider alongside his new Trek-Segafredo teammate Vincenzo Nibali, who has arrived from Bahrain-Merida.

Ciccone enjoyed a break-out 2019 season, winning over the Mortirolo in the Giro d’Italia, where he also claimed the mountains classification, and then wearing the yellow jersey for two days at the Tour de France.

The 25-year-old placed 16th overall at the Giro and has designs on one day focusing his attention on the general classification in Grand Tours, but he is content to play a supporting role for Nibali at this year’s corsa rosa.

Ciccone to ride under Nibali's wing in 2020

Nibali enthusiastic about 2020 goals despite turning 35

Vincenzo Nibali: I couldn't wait to change teams and now I can't wait for the new season

“I see only benefits because in the end, at 25 years of age, it’s better to have a few more years of growth and development alongside a great rider than maybe trying to do more by yourself too soon and not maybe not managing to do it,” Ciccone told Cyclingnews. “I prefer to grow calmly and follow my path.”

Ciccone was an aggressive presence on the 2019 Giro, going on the offensive day after day to buttress his lead in the mountains classification. His role is likely to be different on this year’s race as he rides in the service of Nibali, but he will have scope to chase success of his own at various points in the season.

“I’ll be there for Vincenzo at the Giro, because he’s there to win the race. But I know that I’ll have chances in some other races, and I can be an important element for the team, both by supporting Vincenzo and getting wins myself,” Ciccone said. “There’s an understanding that I’ll continue on my path of development, working for the team’s objectives, while chasing some personal satisfactions. I’m a bit in the middle, but I’m happy with that. I can learn from Vincenzo in the Grand Tours and play my own cards a bit too.”

Ciccone shared a room with his new teammate at Trek-Segafredo’s pre-Christmas training camp in Sicily and he will follow a largely similar programme to Nibali in 2020.

A native of Abruzzo, Ciccone turned professional with Bardiani-CSF in 2016 and enjoyed a sparkling start to his professional career when he won a stage of that year’s Giro in Sestola. His progress was interrupted briefly that winter when he twice underwent ablative heart surgery to resolve supraventricular tachycardia, but he resumed winning ways with stage victory on the 2017 Tour of Utah and then landed the Giro dell’Appennino the following year.

“It’s water under the bridge, and I don’t think about it anymore, even if it was a bad moment at the time,” Ciccone said of his heart surgery.

He stepped up to the WorldTour with Trek-Segafredo in 2019 and he adapted seamlessly to a full calendar of top-level racing, before catching the eye throughout the Giro with an all-action display across the three weeks of racing. In the opening time trial in Bologna, Ciccone deliberately rode within himself before the final climb of San Luca, where he set the quickest time to take an early lead in the mountains competition, and he would defend the maglia azzurra all the way to the finish in Verona.

“The Giro was a bit of a surprise for me, too,” Ciccone said. “It’s my favourite race and I always try to get there on top form but this year I was surprised by my condition, which was super for all three weeks.

The high point of Ciccone’s Giro d'Italia, of course, was his win on the rain-soaked stage 16 to Ponte di Legno. Having led over the Mortirolo, Ciccone proceeded to out-sprint breakaway companion Jan Hirt (Astana) to claim the honours.

“It was a Giro where I was always on the attack. I was in the break every day and I think the public at home were cheering for me to win that stage,” said Ciccone. “It was a pleasure. It’s nice to have a lot of people supporting you.

“People like it when riders manage to be themselves. I’ve probably lost a lot of opportunities to win with my style of riding, but that’s my way of being. Sometimes on the bike, I’m the way I am in normal life: a bit explosive, a bit euphoric, always smiling.”

Ciccone’s remarkable Giro was followed by a Tour de France debut, and he set off from Brussels mindful that he needed to take advantage of his condition before fatigue inevitably began to tell in the latter part of the race.

He was as good as his word, going on the offensive on stage 6 to La Planche des Belles Filles, and although he endured the disappointment of missing out on stage victory to Dylan Teuns, he had the considerable consolation of divesting Julian Alaphilippe of the maillot jaune.

“My big dream was to win a stage of the Giro and the Tour in the same year, so when I understood there was a chance to play my cards in that stage, I was only thinking of the stage win,” Ciccone said. “I thought I was the strongest, so I was disappointed to lose the stage. I wasn’t riding for the yellow jersey, I was riding for the stage.

"In the last two kilometres, I had even stopped pulling and that meant we lost a lot of time to the group behind. Looking back, if I had pulled, I might have been able to wear the jersey for more days because I would have had more time.”

Ciccone’s spell in yellow would last two days, while a heavy crash in the second week of the Tour meant that the final third of the race was trying, though he had the wherewithal to make it to Paris in 31st place.

“In the end, it was better to wear yellow than win a stage,” Ciccone said. “Winning is always difficult, but it’s harder to wear a leader’s jersey in a Grand Tour. There are great riders who have never worn the yellow jersey.”

Ciccone is mindful that his 2019 season has heightened expectations, both externally and internally.

“It launched me onto another planet,” he said. “I always knew I could do well, but when you get important confirmations like the ones I had from the Giro and Tour, that changes something. But I’m still calm and working like in previous years.”

The Italian will hope for similar progression in 2020, a season that might set the tone for the next phase of his career.