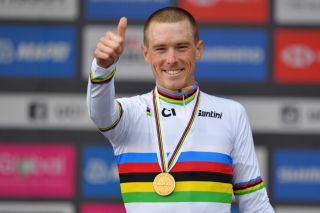 Australia’s Rohan Dennis is all smiles after taking his second individual time trial title in as many years at the 2019 UCI Road World Championships (Image credit: Getty Images)

CCC Team manager Jim Ochowicz has revealed his disappointment at not being able to sign Rohan Dennis for 2020, saying negotiations went ‘as far as they can go’ before the Australian ultimately decided to head to Team Ineos.

Dennis was fired by his Bahrain-Merida team in September, two months after suddenly quitting the Tour de France in a shroud of mystery.

After he won the world time trial title in resounding fashion at the end of September, contract talks intensified, with CCC and Ineos in the frame, as well as links to Movistar and Trek-Segafredo.

Rohan Dennis: You've got to keep pushing to get better

“We went about as far as you can go. I thought it was going to happen,” Ochowicz told Cyclingnews at CCC Team’s training camp in Denia.

“You don’t have anything until you have a contract signed, but I thought we were in good shape.”

Ochowicz’s offer was built on the fact that Dennis had previously spent four-and-a-half seasons at the team, when it was known as BMC, and so was familiar with the environment. He also offered the freedom to prepare freely for the Olympic Games time trial in Tokyo.

“I thought we put a good package together. He’s been here before, we know how to work with him, we felt comfortable we could help him continue to grow his skills and reach his goals,” Ochowicz said.

“He knows what we had. It’s a good programme and his goal is the Olympics, so a lot of it was wrapped around that.”

Dennis, however, declined the offer in mid-October.

“That was a decision he had to make, and I don’t know exactly what his methodology was for that,” Ochowicz said. “It was disappointing.”

As for what he makes of the 29-year-old’s prospects at Ineos: “It’s crowded there. They’ve got 25 rockstars; we’ve got six."

“I thought this would be an easier place for him to settle in and get racing again, but it’s ok. I’m happy for him. If he’s satisfied and happy with his choice, I hope it works out for him.”

Hopes for the new year

Ochowicz’s disappointment is understandable. Although he’s strengthened his roster with the signings of Matteo Trentin and Ilnur Zakarin, Dennis would have not only added star quality, but big time trial wins and possibly even stage race success.

As such, Ochowicz describes his 2020 roster as “not quite complete”, but still significantly stronger than 2019, where they had to build from the bottom after the departure of half the old BMC riders.

With a new-look outfit and a host of new faces, Ochowicz stated 12 months ago that the aim was to win 20 races in 2019. With just six on the board, he now concedes that target was “maybe a little lofty”, but points out the 18 second places and 15 third place. “Any one of those could have been a win. We had a fair chance to get to 20, but we didn’t.”

The team have made nine signings for 2020. While they still lack a top-level sprinter, the arrival of Trentin and Zakarin bolsters the Classics and stage racing departments, respectively.

Although Greg Van Avermaet topped the UCI’s one-day race ranking, his only Classics victory came at the GP de Montreal, and he has said he didn’t have enough support at key points in the spring.

Ochowicz puts that down to a ‘strategic error’, where resources were burned too early in races, but insists next year will be different.

“You’re going to see a lot more power from our group. The younger guys will benefit from that year’s experience. With the arrival of Trentin, and the improvement of the other guys, the performance will be up quite a bit.

“We’ll be able to be up there at the end on a consistent basis. I think we’re going to be going head-to-head with whoever the best team is.”

As for the stage racing department, CCC now have a general classification rider in Zakarin but, despite the Russian’s podium at the 2017 Vuelta and top 10’s at the Giro d’Italia and Tour de France,

“He’ll be going for GC in one-week races, but the Grand Tours will depend on circumstances. We’re not going in there thinking we’re going to be on the podium. We’re putting more of an emphasis on stage wins. You get a bigger bang for you buck. It takes the pressure off and gives you more options. If we could get on the podium, that’d be different but you wouldn’t know that until well into the race.”

As for the campaign as a whole, Ochowicz is fully optimistic 2020 will be better than 2019, but has learned his lesson from 12 months ago.

“We’re not putting a number on the wins – we’re not doing that again,” he said.

“But expectations are higher across the board. We’re thinking long-term, continuing to add quality, signing young riders, and we want to continue accumulating significant victories.”