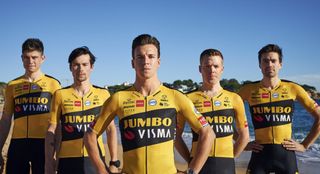 The Dutch team showed off the new design before the official team presentation in the Netherlands on Friday, announcing the opening of pre-ordering of the 2020 race clothing.

Jumbo-Visma has stuck with the yellow and black colours that helps them stand out in the peloton but simplified the colours and design. Title sponsors Jumbo and Visma logos appear in a black block across the chest, with the rest of the jersey bright yellow. Minor sponsors, including Hema, are positioned on the chest and shoulders, with black shorts completing the classic look. The race clothing is made by Agu.

Jumbo-Visma finished the year with a Vuelta a Espana win courtesy of Primož Roglič and podium places in both the Giro d'Italia and Tour France. They find their GC contingent bolstered ahead of next season with the arrival of Dumoulin from Team Sunweb.

Kruijswijk – who finished third in the Tour this year – believes that the squad has what it takes to knock Ineos off their perch.

"I'm convinced that with the team we have, and the riders that we have, we can be in for the win at the Tour," Kruijswijk told Cyclingnews at Jumbo-Visma's team camp in Spain.

Kruijswijk has already been named as Jumbo-Visma's team leader for the Vuelta. Their full Grand Tour plans will be revealed on Friday during the team presentation.

"We can now put together the strongest team possible in the fight against a team like Ineos," team manager Richard Plugge said when Dumoulin's transfer was revealed.

Dumoulin appears back to full strength and motivated after his knee injury, transfer from Team Sunweb and time off in 2019.

"The year had two sides. In one way it’s been really disappointing but on the other side, it’s been liberating. The last couple of months, since my operation, actually, have been really nice. I really enjoyed my time away from professional cycling and I’m really energized again for the coming years," Dumoulin told Cyclingnews this week.