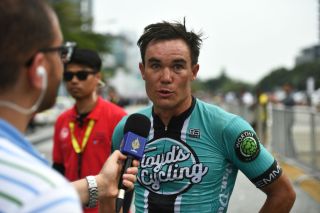 Pro cycling can be a fickle business at the best of times, one where riders can be flying high one month and scrambling for a contract the next. This year has been no different, with multiple teams folding at the top levels of the sport.

There are seven riders at Israel Start-Up Nation who know this first-hand after their Katusha-Alpecin team folded this year. Another man on the 2020 roster has been through the wringer multiple times in the past several seasons is Travis McCabe, the American sprinter who will make his WorldTour debut at the age of 30.

McCabe has raced in the US scene for his entire career to date, including a stop at UnitedHealthcare. He faced retirement when that team disbanded at the end of 2018, but got a lifeline at Floyd's Pro Cycling – a step down to Continental level but a chance to keep racing.

Fast forward a season and it was the same story as Floyd's announced that there was no title sponsor for 2020. Once again, McCabe was in that familiar cyclist's predicament.

McCabe just shy of victory at Tour of California

"I literally went from either riding for [Continental team] Wildlife Generation or Israel Start-Up Nation. I didn't know what was happening," he tells Cyclingnews at the team's pre-season camp in Tel-Aviv, Israel.

"I'd been talking with Israel since the Tour of California, and things picked up at the Tour of Utah. It looked really promising – if they didn't go WorldTour. But then during Utah, the whole merger happened, and I didn't know if it would be a thing or not.

"I just stayed patient with the process, dropped them a phone call or email. The only other real option was Wildlife Generation – either that or end my career. So, it was either that or going WorldTour. Yeah, it's pretty crazy."

McCabe enjoyed a strong 2019 campaign with Floyd's, winning a stage apiece at the Tours of the Gila, Langkawi and Utah, as well as the points classification at the latter two races. He also finished second in Sacramento at the Tour of California, missing out to Peter Sagan in a photo finish – proof that he can mix it up with the WorldTour's best.

The move is the first chance McCabe has had to step up to the top level of cycling, and after six-and-a-half years spent in the US scene.

"It was a good year, a transitional year," says McCabe. "Things were pretty difficult in my personal life, but I didn't let it affect my racing. Being on Floyd's was a blessing. It was a really fun time. I loved it and I love all those guys.

"Now I have a unique opportunity. I'm 30, so a lot of people think that's old, so for me to get the opportunity is a big deal. I hope to kind of prove that age doesn't matter still. Michael Woods is a good example – he didn't come into it until he was 28. He was able to make a splash.

"I think I've constantly proved that I have the ability to do it – it's just butting that door open and getting the opportunity, and I'm really fortunate that Israel Start-Up Nation gave it to me.

"It's my first chance to move up. It's been, in my eyes, a long time coming. It won't be easy, and I've always known that, so I'm not taking it for granted at all. Just to get the opportunity is pretty crazy, dude. It's a dream come true."

The dying US scene

After starting his racing career at the age of 20, he got his first shot at a UCI team, Michael Creed's Continental squad Smart Stop, four years later in 2013. Since then, he's taken wins at the Winston-Salem Classic, the US National Criterium Championships, four stages at Utah, three at Langkawi and one at the Herald Sun Tour.

He's also witnessed what he called a "dying" racing scene, with races and teams falling by the wayside year-on-year. McCabe has, of course, experienced it first-hand at his last two teams, while the crown jewel of US cycling, the Tour of California, is on hiatus after 14 editions.

"The US scene is dying, and we've been seeing that happen for – since I think I started racing," says McCabe. "I talked to guys who raced before me and they talked about the races we had like Georgia, Missouri, Philly, and I was witnessing it all happening as the teams disappeared too. Now it's blatantly obvious with California going away.

"I wanted to stay and do another year but didn't want to take the opportunity away from a younger rider who might still have a chance. So, I was content with just calling it. That happened on a road trip with teammate Alex Cowan. Then this happened and at the flip of a switch everything changed. Now I get to prove myself and make it happen."

When talking about Israel Start-Up Nation, McCabe echoes many of the talking points brought up by other riders at the training camp. They're an open and inclusive team, with riders leaving their ego at the door, or at least that's the feeling after a couple of days together.

It's also an impressive achievement to do so, given that the team is made up of a handful of star names among a number of riders who aren't household names. The atmosphere will inevitably be a little less relaxed once the racing starts, and "there'll be speedbumps along the way given it's a new team" says McCabe. But for now, the team's policy of selecting riders based on personality as well as ability, looks to be going well.

"Everyone is very open and just chill," says McCabe. "I knew James Piccoli, Alex Cataford, a few guys from Israel Cycling Academy I had raced against, but with a lot of them it's brand new, like meeting André Greipel, Nils Politt and Dan Martin was pretty cool.

"They're the kind of guys you fanboy over when you're watching them race, and then getting to meet them, even at 30, you kind of do it a bit. Then you're like 'yeah, they're just normal guys. They're fun to talk to and hang out with.'"

American hopes to race Spring Classics and a Grand Tour

McCabe will hit the road in South America in January, taking on the Vuelta a San Juan before heading to the Tour Colombia 2.1. Beyond that, the schedule is more up in the air, but McCabe is looking forward to getting chances at races he's dreamed about for years, starting in the spring.

"I want to do Strade Bianche, that looks a fun race to do. Obviously, I want to do the Classics because I've dreamt about those since I was a kid," McCabe says. "But, first and foremost, I have to prove myself and show that I have the ability to do it.

"Roubaix is the dream but I don't see that happening this year, maybe next year. But hopefully I can do E3 BinckBank Classic, Omloop Het Nieuwsblad, maybe Gent-Wevelgem."

His ambitions aren't limited to the one-day races, though. McCabe, who hasn't yet raced a stage race longer than eight days, is also keen to test the limits of his recovery and endurance at a Grand Tour. Which one? Well, he's not aiming for the Tour just yet – he'd be thrilled to make it to the Giro d'Italia or Vuelta a España.

"After that, I'd like to do a Grand Tour. The Giro or Vuelta would be pretty cool. I want to test my body just to see how goddamn hard it is to do something like that. I'm open for it all. I just want to race, go out there and prove myself. It's exciting.

"It's going to be hard. I think I'll get opportunities when they come, but I also know it's a big step up even from Pro Continental level. I think I have the physical level to be here, but it's just the mental capacity and learning the ropes of European racing. But I also have good guys to learn from, great veterans.

"I'm not afraid to bang bars, hold my line. I'll headbutt someone if I have to," he jokes. "I'm a sprinter so I know how to handle my bike and I'm not going to be pushed around. I think that, with the team, being at WorldTour level, you do get a bit more respect. Hopefully that helps, but I'm not going into it timid or frightened of what's ahead of me."