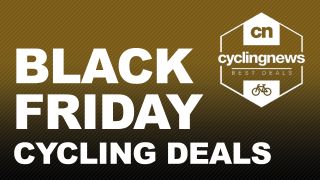 A number of major international cycling retailers have launched their Black Friday deals well in advance of the official Black Friday weekend. In the first week of November, the Black Friday cycling deals have kicked off in a big way, with retailers Chain Reaction Cycles being first to launch, quickly followed by Tredz, Rutland Cycles, and now Wiggle.

If you're looking for some early Black Friday Cycling Deals, you're in luck. The biggest players in online cycling retail have launched their Black Friday sales already and will be continually adding more deals each week.

Chain Reaction Cycles was one of the first to kick things off, launching its Black Friday deals on November 1 – almost a month before Black Friday itself. Shortly after, Tredz followed suit by launching a 'Black Ticket Event'. Since then, Rutland Cycling has launched week 1 of its Black Friday sale, and most recently, Wiggle announced the first week of its deals.

The decision to launch Black Friday early isn't a new one to a number of cycling retailers. Many companies took a similar approach last year, releasing new deals each week throughout November.

Luckily for us consumers looking to get an early Black Friday deal, retailers are mimicking 2018 by launching early again this year. There are already some great Black Friday deals to be had on all cycling tech such as road bikes, turbo trainers and helmets, along with discounted brands such as Castelli, GoPro and Garmin.

With international delivery available, this is likely to be music to the ears of cyclists the world over. If you've been holding fire on your next big-ticket purchase, you needn't wait anymore!

Castelli Gabba 3 RS | 50% off | Wiggle
The Castelli Gabba has become synonymous with wet-weather gear, and at this time of year, as winter takes hold, it's the perfect time to take advantage of a 50% discount at Wiggle. View Deal

Fizik R4B Road Shoes | 50% off | Chain Reaction Cycles
The R4B shoes from Fizik are available in three colours, in a range of sizes, so if you're in the market for some new comfortable, yet race-ready shoes, you can now get these for half price. View Deal

Scott RC Road Shoes | 89% off | Rutland Cycling
Formerly £299.99, these women's race-ready road shoes are now available at a fraction of the cost at just £32.99. Sizes are limited, but at this price, they are the real (Black Friday) deal.View Deal

Castelli Gabba 2 | 50% off | Tredz
Like the men's version above, the women's Gabba is also available at 50% off. Tredz have the jacket available in three colours and four different sizes, so you're bound to find something to suit your needs. View Deal

While we've handpicked a few of our favourite deals, there are thousands more Black Friday deals available, so be sure to come back and share your favourite in the comments below.