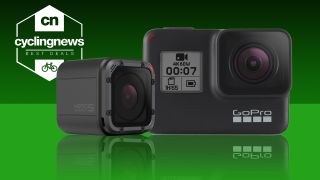 We've compiled the best GoPro deals to help you, our fellow cyclists, record your ride no matter the reason.

Whether you're hunting down a cheap GoPro deal because you want to try your hand at vlogging, or you're simply a cyclist that wants to record your saddle time in case of an accident, there are plenty of options available. If you're simply looking for the best deals, we've broken them down into USA and UK deals, and then below we go through the GoPro models, explain the pros and cons of each, and provide the best deals we can find.

Of course, GoPro isn't the only maker of action cameras with the likes of DJI and Sony throwing their hat into the ring. Check out our guide to the best action cameras for more.

Best GoPro deals in the USA

Jump to: Best GoPro deals in the UK

Best GoPro deals in the UK

Jump to: Best GoPro deals in the USA

If you're unsure which to choose and you're looking for advice, we've put together a handy guide where we outline the best action cameras for cyclists.

One great thing about GoPro is you can rest assured that whatever price you pay, be that full RRP or a hefty discount, you'll be getting a well-built, waterproof action camera with fantastic picture quality and a ready-for-anything construction. Here, we'll run through the basics of each, and provide the best deals for all.

As we'll start with the more recent GoPro releases and work our way backwards, you should find the discounts grow as you work your way down the page, but we'll be sure to highlight the deals that stand out.

This range-topping model from the market leader features all the bells and whistles, but cheap deals may be hard to come by for now

$229
View Deal at BHPhoto
$229.99
View Deal at Crutchfield.com
$243.91
View Deal at Amazon
See all prices (25 found)
616 Amazon customer reviews
☆☆☆☆☆
Live streaming
GPS
Waterproof without housing
Battery life will last little more than a criterium or a day's worth of commuting

Cheaper, but misses out on some features

A new option for the budget-conscious, but discounted older models might be a better choice

If you're an aspiring vlogger and want stunning 360-degree footage, this is your go-to option

The former leader is still a solid action camera, and its age should mean a cheap GoPro deal is available

4K footage should provide clear footage no matter your discipline