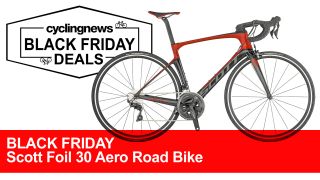 When the original Scott Foil was launched, it was one of the stiffest frames available - perhaps considered a bit too stiff. Scott updated the design a few years ago, and now the aero road bike has much softer ride quality and but maintains plenty of the original's power-transfer and agility, thanks in part to the new frame mirroring the geometry of the original.

The Foil 30 is already one of the more budget-friendly builds of the Foil, and now it can be had for 42-per cent off the normal asking price.

The Foil can't be mistaken for anything other than an aero bike, and the brand claims it's six-watts faster than its predecessor at 45kph, which equates to 27-seconds over 40km.

Scott dropped the chainstays and incorporated a squared-off D-shaped seatpost, which together make it one of the more compliant aero roadies we have ever ridden.

The frame and fork are made from the brands HMF carbon and the bike features a full Shimano 105 drivetrain. At the front, there's a standard Sycnros alloy bar and stem, rather than the one-piece carbon cockpit which the more expensive versions are specced with - it's not as aero, but sure does make swapping to a longer stem or a different bar shape considerably easier. Rolling on Syncros rr2.0 alloy wheels and 25c Continental Grand Sport tyres, the bike is claimed to weigh 7.8kg in this build.